In previous articles, we have discussed our positive outlook on the Chinese economy. Economic indicators are strong and this will translate into increased opportunity for businesses. This can already be seen from 2017 data showing that 12,000 business were started per day in China. The people of China are experiencing both an economic, and a technological revolution. One of the most prolific companies is Xiaomi (XI) (“Sha-oh-me”). With a strong foothold in the Chinese and Indian market, a solid top and bottom-line, and an innovative product portfolio, management has the company well positioned for a global expansion. However, the question is not: ‘Is the company ready?’, but rather: ‘Is there international demand for the company’s products?’.

Xiaomi (XI), founded in 2010, is one of the world’s largest smartphone designers/developers. Xiaomi saw extremely fast growth (over $11 billion in revenues within 4 years). The main reason for this was because of their focus on creating the leading low-cost smartphone. This quickly expanded into other tech segments including laptops, smart-devices, and internet services. This move however, was in response to the increasing smartphone competition from opposing low-cost producers (Oppo and Vivo).

As a result, 2016 became a lackluster period for the company. Xiaomi, originally the frontrunner in the Chinese market, had fallen to 5th place. Management blamed the exponential growth, with CEO Lei Jung stating:

In the first few years, we pushed ahead too fast. We created a miracle, but also drew on some long-term growth…So we have to slow down, further improve in some areas, and ensure sustainable growth for a long-term future.

The company has pushed hard to recover. With international initiatives and increased focus on their low-cost strategy, it appears to be paying off. The company has managed to do what few can do: bounce back.

The reliance on international sales is going to continue to increase moving forward. Because China’s smartphone market as a whole is slowing and becoming saturated, the need for global expansion is high. However, we are already seeing Xiaomi prove that:

It has the ability to not only expand, but compete in international markets There is a demand for their products outside of the home country of China

Look no further than India. India is a developing nation with a large unmet demand for smartphones. As seen in the chart below, Xiaomi is now head-to-head with Samsung (OTC:SSNLF).

More recently, Xiaomi was able to push past Samsung in 2017Q4 with a market share (shipment) of 27 – 25% (Xiaomi) vs. 25 – 23% (Samsung). But even though growth in India has blown away expectations, India is also reaching smartphone saturation. As a result, Xiaomi management has announced plans for a global expansion.

The plan is to open 2000 brick-and-mortar locations by 2019. The breakdown for the store are 50% international and 50% domestic (China). These new stores alone are expected to produce over $10 billion in revenue by 2021. The company already operates in ~40 countries but according to Senior VP, Wang Xiang:

“…You will see us in almost every country.” 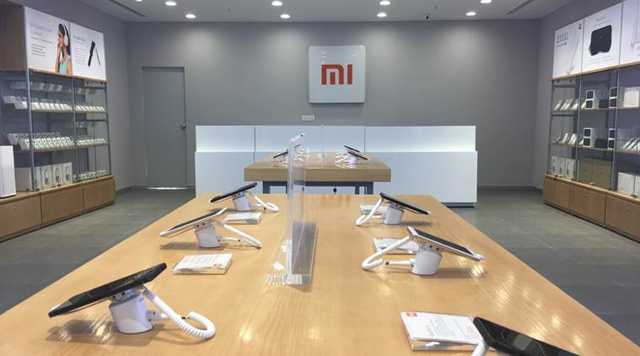 The key part of this strategy is that it will focus on physical stores vs. an e-commerce approach. While traditionally, e-commerce has been the focus, management has found that this is actually hindering their sales. Because Xiaomi is a low-cost producer, consumers are generally more hesitant to purchase their products without a physical interaction. With more stores available, consumers can interact with the phones or other devices and combat the stigma of “You get what you pay for”. This strategy will also apply to their smart devices (TVs, speakers, etc.) as they roll out internationally.

Xiaomi is also in talks with service carriers such as Verizon (VZ) and AT&T (T). This is vital as the company plans to roll out their phones to US markets as early as this year. The demand has been tested with other products and it is incredible. The company already sells stateside through retail giants Walmart (WMT) and Amazon (AMZN). Devices launched here (headphones, TVs, and a coding robot) sold out quickly, sometimes within 30 minutes.

As mentioned earlier, 2016 was a rough period for the company. Sales were falling with rumors of phone sales dropping as much as 43%, and competition was taking market share. This is the exact opposite narrative experienced the previous 4 years, as shown below. However, the company has managed to regain its lost market share and come back stronger than ever. 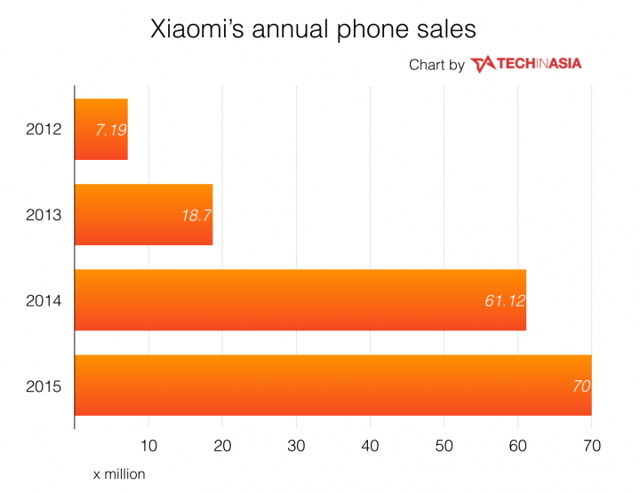 Xiaomi is rumored to be IPO’ing in the US as early as this year. The valuation is problematic, ranging from $46 billion to $100 billion. The last funding round in 2014 was run at a valuation of $46 billion, much more ‘reasonable’ compared to $100 billion as some executives like to tout.

The company appears to have been able to bounce back from its growing pains of 2016, and is proving to the world that they are an in-demand company. They are among the leaders in their markets (smartphones, wearables, smart-devices, etc.) and have a planned expansion because of this. A US IPO may bring in $5 billion or more, according to Bloomberg. This funding could be the capital pillow to ensure that these plans come to fruition.

Disappointing growth for the company is still in the double digits – a lot higher than other companies – but this does not come without the increased risk. Even though we have seen Xiaomi able to compete against behemoths such as Samsung, they are still relatively young with a lot to prove. The potential could lie in another segment of the company rather than with their smartphone segment, but there is still a massive cloud over the company until they release financials and documents closer to the actual listing.

This is an exciting time for the company and as we move forward it will become more and more clear whether or not this is a company to own in your portfolio.

Editor’s Note: This article discusses one or more securities that do not trade on a major U.S. exchange. Please be aware of the risks associated with these stocks.