Willis Towers Watson (NASDAQ:WLTW) posted its earnings results on Monday. The financial services provider reported $2.71 earnings per share for the quarter, topping the Thomson Reuters’ consensus estimate of $2.63 by $0.08, Bloomberg Earnings reports. Willis Towers Watson had a return on equity of 11.25% and a net margin of 6.93%.

The business also recently announced a quarterly dividend, which was paid on Monday, April 16th. Investors of record on Saturday, March 31st were given a $0.60 dividend. The ex-dividend date of this dividend was Wednesday, March 28th. This represents a $2.40 dividend on an annualized basis and a dividend yield of 1.61%. This is an increase from Willis Towers Watson’s previous quarterly dividend of $0.53. Willis Towers Watson’s payout ratio is currently 28.20%.

In related news, insider Joseph Gunn sold 9,438 shares of Willis Towers Watson stock in a transaction dated Tuesday, February 20th. The stock was sold at an average price of $159.95, for a total value of $1,509,608.10. Following the sale, the insider now owns 22,041 shares of the company’s stock, valued at $3,525,457.95. The transaction was disclosed in a document filed with the SEC, which is available through this hyperlink. 0.50% of the stock is currently owned by insiders.

Willis Towers Watson announced that its board has initiated a share repurchase plan on Monday, February 26th that authorizes the company to repurchase $400.00 million in outstanding shares. This repurchase authorization authorizes the financial services provider to buy shares of its stock through open market purchases. Shares repurchase plans are usually an indication that the company’s board believes its shares are undervalued. 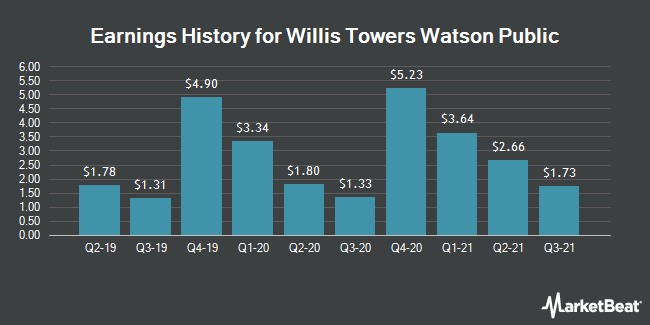