Here’s what investors should know about the good day enjoyed by the market darling. 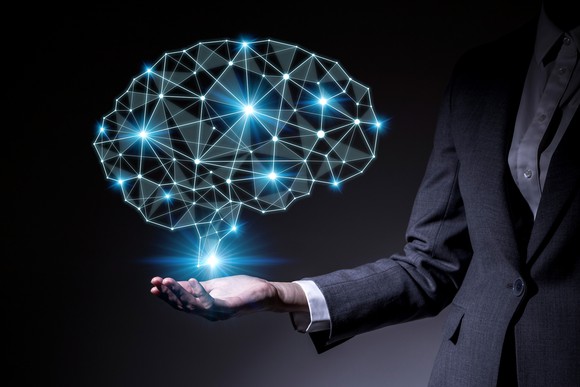 NVIDIA stock surely got a tailwind from the strong market on Tuesday. But we can attribute a good chunk of the stock’s rise to Wall Street getting a dose of artificial intelligence (perhaps accelerated by NVIDIA’s graphics processing units, or GPUs?) with respect to its views on NVIDIA. (I feel OK jesting a bit, as I’ve been consistently bullish since I began covering the stock in late December 2016 and have continuously said there’s good reason to believe Wall Street’s growth estimates will likely prove significantly too low.)

Morgan Stanley raised its rating for NVIDIA stock to overweight (equates to a buy) from equal-weight (or hold), with the analyst who covers the stock projecting the company will beat expectations in fiscal 2019 (which began in late January). The firm merely maintained its price target, which is$258 per share. That represented a nearly 20% upside to the stock’s closing price on Monday, and represented a 13.2% upside to the stock’s closing price of $227.91 on Tuesday. The analyst’s note said, “[W]e see shorter-term drivers in gaming offsetting crypto weakness, and progress in data center inference [machine learning] expanding the long-term opportunity,” according to CNBC.

For some context, the stock’s all-time closing high is $250.48, which it reached on March 16. Its pullback since then has been due to weakness in tech stocks in general, concerns about its cryptocurrency business drying up due to prices of digital currencies plunging this year, and an Uber driverless vehicle striking and killing a pedestrian in Arizona last month. This fatal crash negatively impacted the stocks of companies involved in the autonomous-vehicle space. It’s important to note that while Uber was using NVIDIA’s off-the-shelf GPUs, the test vehicle involved in the accident was not using NVIDIA’s DRIVE AI car computing platform for self-driving vehicles, as was erroneously reported by some outlets.

Needham & Co.’s analyst for the stock also made some positive statements and gave it a $300 price target on Tuesday, according to Business Insider. Moreover, on Monday, the Evercore analyst who follows NVIDIA said the stock offers a “tremendous buying opportunity.”

What’s an investor to do?

I’d recommend what I’ve been recommending for some time: buy NVIDIA stock. If you’re a long-term investor, don’t pay much attention to Wall Street’s ratings because the Street is largely focused on the short term. Moreover, analysts often change ratings and price targets.

There’s no guarantee the market will give you a better entry point. Besides, if NVIDIA remains the dominant player in gaming and AI, it’s going to make little difference in three years if you paid $208, $238, or $258 for the stock. And it’s going to make even less difference in five years and even less still in 10 years, and so on. As with any stock, the best thing to do is to dollar-cost average (invest the same dollar amount at some set interval, such as once a month or quarter) your way into a full position. This way, if your initial purchase turns out to be at or near the stock’s high for some time period, you won’t be buying all your shares at that price. With the advent of online discount brokerages, trading costs are very low, so they’re generally not a reason to avoid dollar-cost averaging.