If you had to choose between a volatile stock and a stock that was slowly and steadily declining, you’d probably pick the former. But that doesn’t make it any easier to weather the gut-churning drops and swings of a share price that can’t seem to hold still.

Welcome to the last three months of being a General Electric (NYSE:GE) shareholder. In contrast to the stock’s smooth downward trajectory in 2018 (and, sadly, 2017), 2019 has been a roller-coaster of leaps and dips. And unfortunately, it looks like things won’t slow down anytime soon.

Here’s why investors should expect even more volatility from GE’s stock in the days and months ahead. 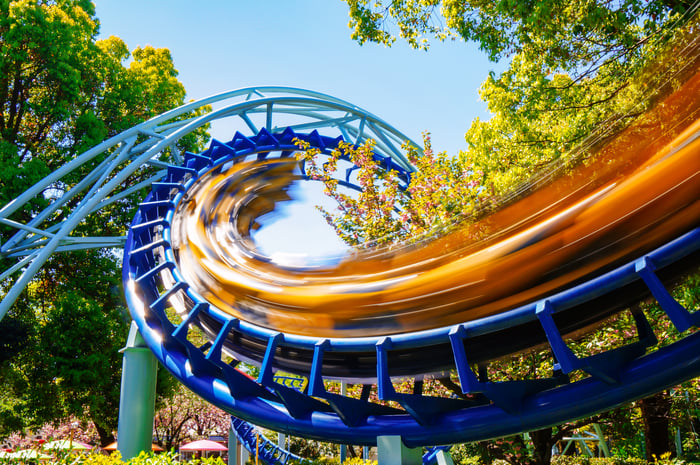 The rough road behind

Just how volatile has GE’s stock been? For comparison’s sake, have a look at GE’s stock price vs. the S&P 500 so far this year: 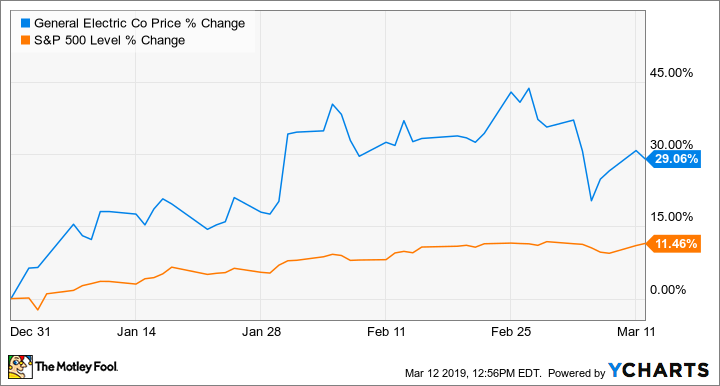 In contrast to the S&P’s smooth and steady rise, GE’s shares have been incredibly volatile, especially during February. (Also, don’t get excited that GE’s shares have outperformed the S&P so far this year. By virtually every other timeframe — six months and one, three, five, and 10 years — they are underperforming by a LOT.)

GE’s beta coefficient — a measure of a stock’s volatility relative to the market as a whole — confirms that shares have been more volatile in 2019 than in 2018. GE began 2018 with a beta coefficient of negative 0.9 (a lower beta indicates less volatility). However, by April 2018, it had jumped up to 0.0. Then, in January 2019, there was a big jump in beta to 1.2, where it remains today: 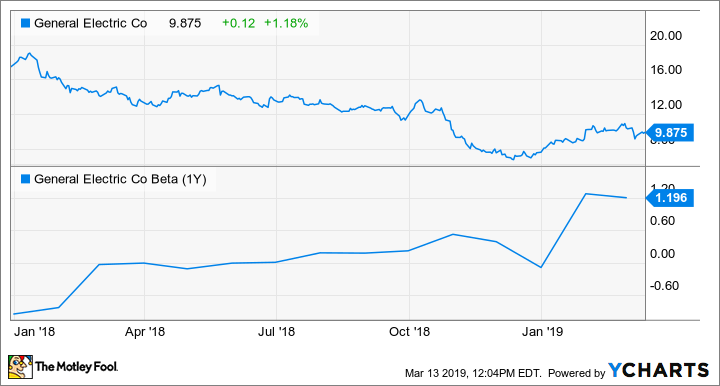 Here’s why this is happening now.

The rocky road we’re on

When short-lived CEO John Flannery took the helm of GE in August 2017, the company’s shares had already lost about 20% of their value from their post-Great Recession peak of about $32/share. By October 1, 2018, when Flannery was abruptly ousted by GE’s board, shares were trading at just above $12/share, more than 60% off those highs. That was thanks to some of the hornet’s nest that Flannery uncovered during his time in the C-suite, which resulted in earnings misses, a painful-but-necessary dividend cut, lowered guidance, and plans to sell off businesses like transportation, oil and gas, and healthcare.

The first few months of new CEO Larry Culp’s tenure were relatively quiet, although shares continued to fall. Then, in early December, GE officially cut its quarterly dividend to $0.01/share, and the stock tumbled to a new 20-year low of about $7 per share.

With so much pressure on GE’s management to right the ship, the company is being heavily scrutinized by analysts and major shareholders, so any big announcements are likely to have an outsized effect on the share price. And — after a long period of institutional silence at the beginning of Culp’s tenure — the big announcements are coming fast and furious.

GE’s sale of its biopharma unit to Danaher caused the stock to jump by 15% in February. In March, the warning that GE would likely be cash-flow-negative in 2019 caused shares to plunge by 12% over the next two days. By contrast, the announcement of the merger of GE’s entire transportation unit to Wabtec in May 2018 only caused the stock to drop by 7.2%. When GE reveals its official 2019 guidance on March 14, there’s likely to be another double-digit move…in which direction remains to be seen.

A tough road ahead

If General Electric could straighten itself out quickly and show investors a clear path forward, its volatility problem would likely be solved. Unfortunately, management admits that isn’t likely to happen.

For one thing, the asset disposition plan — merging GE Transportation with Wabtec, selling its stake in Baker Hughes, a GE Company, and spinning off its healthcare unit — has started to evolve, with new terms announced for the Wabtec deal and Culp’s admission that a spinoff of the remainder of healthcare is unlikely in 2019. Any further changes will probably affect the share price.

GE Power, the perennial thorn in the company’s side, may be bottoming out, but isn’t quite out of the woods yet. According to Culp on the recent Q4 2018 earnings call, the unit is in need of “strengthening,” while CFO Jamie Miller projected the heavy-duty gas turbine market will be “flat over the next few years.” If the company’s problems with Power really stretch on for years, that’s a lot of opportunities for those problems to hit the stock price.

Finally, with management finally starting to talk to investors regularly — if not frequently — it offers more opportunities for such comments to affect the share price. Culp gave a very candid interview on March 5 at the J.P. Morgan Aviation, Transportation & Industrials Conference, and Miller is set to give a presentation on March 19 at the Bank of America Merrill Lynch Global Industrials and EU Autos Conference, just after the company announces 2019 guidance on March 14. Don’t get me wrong: This new trend of management talking more is a very good thing, but it means more opportunities for stock volatility.

What investors should expect

If you can’t stomach volatility, GE’s probably not going to be the stock for you in the short term. The troubled conglomerate is releasing more and more news as it finalizes its turnaround strategy, and it’s under more scrutiny than it’s been under in years. Put it all together, and that’s a recipe for wild stock swings. Although it’s preferable to a stock that’s in freefall, be aware of the risks before you buy. And if you already own shares of GE…well, hang onto your hats!