U.S. equities are pushing higher on Friday to cap what looks like the ninth straight weekly gain as investors prepare to close the books on what’s been one of the best starts to a year in the markets ever.

From fears over monetary policy tightening and bank liquidity, the clouds hav Titans of industry like General Electric Company (NYSE:GE) or International Business Machines Corp. (NYSE:IBM) are rarely described as sexy. Pioneering, yes, and enduring, without question. But the aforementioned label is mostly reserved for the exciting innovators in the here and now — thi

Stock indexes were up in the morning Thursday, but drifted down during the session, despite advancing issues outnumbering decliners. TheDow Jones Industrial Average (DJINDICES:^DJI)lost about a quarter percentage point, and theS&P 500 (SNPINDEX:^GSPC)closed just barely in the red. 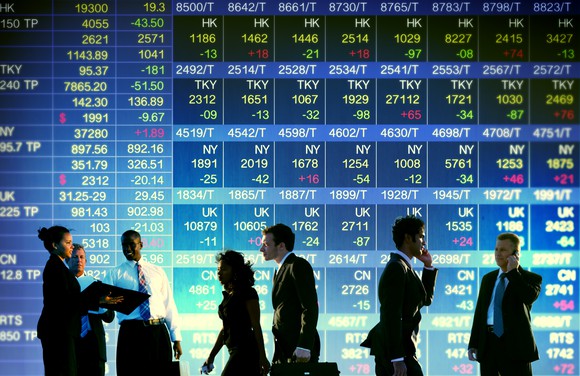 Walmart reported solid sales performance in its fiscal first quarter and managed to beat profit expectations despite rising costs and investments in e-commerce, but shares slumped 1.9%. Sales grew 4.4% — or 2.7% in constant currency terms — to $122.7 billion, compared with the analyst consensus estimate of $120.5 billion. Adjusted earnings per share of $1.14 beat estimates by $0.02, and grew 14% year over year.

Comparable sales in Walmart U.S. stores grew 2.1% with a 0.8% increase in traffic, while Sam’s Club stores had a 3.8% comp gain. Walmart International grew sales by 4.5% in constant currency, and U.S. e-commerce sales grew 33%.

Profits came under pressure, with gross margin falling 23 basis points in the U.S. and 15 basis points overall due to rising transportation and fuel costs and “price investments.” Operating costs as a percentage of sales increased 11 basis points primarily due to investments in e-commerce.

Walmart executives highlighted the investments the company is making in its future. It will increase online grocery pickup by around 1,000 stores this year to more than 2,100 locations in the U.S. It also expects to roll out grocery delivery to 800 stores by year-end, covering 40% of the U.S. population. The company’s most important bet is its acquisition of Indian e-commerce company Flipkart, which it announced last week. Walmart reiterated guidance that the deal will impact this year’s EPS by $0.25 to $0.30.

The earnings report held few surprises, but the good news of decent sales was apparently outweighed by the profit impact of Walmart’s growth initiatives.

Networking giant Cisco Systems announced fiscal third-quarter results that edged out expectations and issued guidance in line with estimates, but that wasn’t enough to inspire shareholders, and the stock fell 3.8%. Revenue increased 4.4% to $12.5 billion and non-GAAP earnings per share jumped 10% to $0.66. Analysts were expecting the company to earn $0.65 per share on $12.4 billion in sales.

Cisco is pushing to grow recurring revenue by moving to a subscription model, and reported some success in that area. Recurring revenue was 32% of the total, which was 2 percentage points above the year-ago result, but less than the 33% reported last quarter. Revenue from the applications segment grew a strong 19% to $1.3 billion, while infrastructure platforms increased 2% to $7.2 billion. Non-GAAP product gross margin fell from 63.2% to 62.9%, primarily due to pricing and higher memory costs.

The quarter was decent for Cisco, although not particularly exciting. Investors were evidently hoping for a better outlook, although the stock is still up 15% for the year.

U.S. equities are pushing higher on Friday to cap what looks like the ninth straight weekly gain as investors prepare to close the books on what’s been one of the best starts to a year in the markets ever.

From fears over monetary policy tightening and bank liquidity, the clouds hav