Let’s buckle up and get a better view of what drove Travelport’s results to start 2018, as well as what investors should be watching in the quarters ahead. 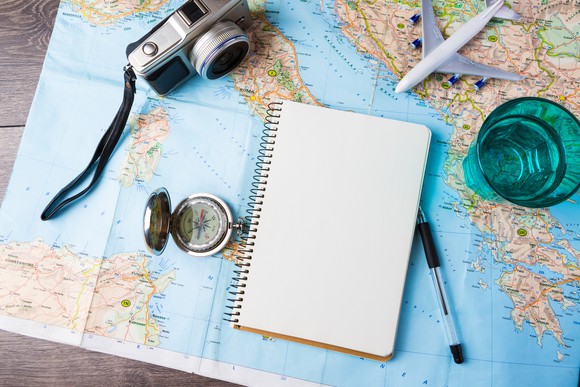 What happened this quarter
On a non-GAAP basis, which adjusts for one-time items like stock-based compensation, net income declined 15% year over year to $0.44 per share. AdjustedEBITDA declined 9% to $154 million. Travel commerce platform revenue increased 5% to $653 million, including:
a slight (0.3%) decline in air revenue to $472.9 million, and 21.8% growth in beyond air revenue to $179.8 million, thanks to an accelerated 81% increase in eNett revenue, to $74 million, helped by greater volume of payments settled with existing customers.
Travel commerce platform revenue by geography included:
21% growth in Europe to $244.4 million, a 6% decline in the Asia Pacific region to $141.5 million, a 4% increase in Latin America and Canada to $29.9 million, a 5% decline in the Middle East and Africa to $79.1 million, and 1% growth in the United States to $157.7 million.
Technology services revenue declined 12% to $25 million, primarily due to the sale of IGT Solutions a year ago. Cash from operations declined 13% to $83 million, while free cash flow fell 35% to $46 million. Travelport also completed a comprehensive debt refinancing in March, extending its maturity dates, diversifying funding sources, and reducing exposure to variable interest rate debt.

Travelport CEO Gordon Wilson called it a “strong start to the year,” pointing out that both its adjusted EBITDA and core travel commerce platform revenue exceeded management’s expectations. Wilson added:

These results include the well-documented loss of one large travel agency in the Pacific region, which impacted Travel Commerce Platform revenue growth by 5 percentage points and Adjusted EBITDA by nine percentage points. Our performance, therefore, demonstrates the continued success of our strategy, resulting in Air revenue growth in Asia and Europe in the quarter, as well as significant air market share gains in the latter region. Beyond Air revenue growth accelerated to 22%, largely due to eNett as the business continued to expand share of wallet at several large OTAs in Asia Pacific and Europe. We continue to invest in innovation to drive growth. In the quarter, this investment supported several new business wins, building on the record level of new business that we signed and onboarded in 2017 and, moreover, enabling us to achieve a significant long-term renewal of our partnership with Priceline.com. Our start to the year, therefore, gives us the confidence to reiterate our financial guidance for full year 2018.

For perspective, Travelport signed its new long-term renewal agreement with Priceline — which is owned by Booking Holdings– in early April, extending the two companies’ roughly 20-year-old relationship and enabling Travelport to continue providing Priceline users with pricing, booking, and ticketing technology and content.

In the end, Travelport essentially delivered as promised, achieving sales growth and striking new partnerships even with the sting of the loss of the large travel agency still fresh on investors’ minds. It’s hard to ask much more of Travelport than that, and I think shareholders should be pleased with where it stands today.