Last month, Skechers (NYSE:SKX) got a negative reaction from investors after reporting its first-quarter 2018 results. It wasn’t that the numbers were bad, but guidance for the second quarter was weaker than hoped.

Revenue increased 16.5% from the same period a year ago, and earnings per share jumped 25%. That fast growth is expected to cool off in the second quarter, with revenue up 9% to 12%, but earnings per share only flat to up 13%. The stock has shed nearly 30% of its value since the report.

Skechers’ head honchos explained that the slowdown is due to multiple factors converging simultaneously. The first is timing of shoe shipments to new markets. Skechers is growing fast overseas, especially in Asia. During the last quarter alone, global retailincreased 9.5%, international wholesales were up 17.9%, and same-store sales outside of the U.S. grew 17.6%. Sales in China expanded more than 30% year over year. The Middle Kingdom is the company’s fastest-growing online market, a new distribution center is being built there. 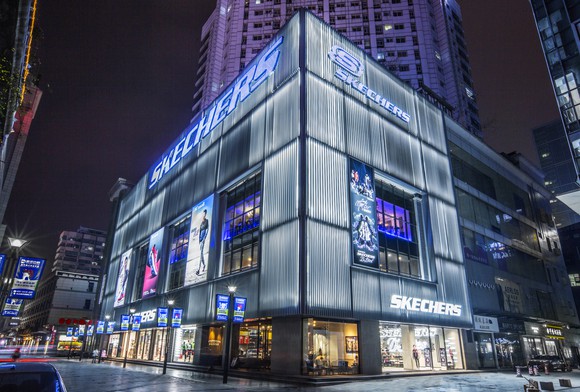 All of that growth costs money, and shipments to end markets can be volatile due to specific product demand and seasonality. Thus, the company expects that some of its shipments to international stores will be pushed back from the second quarter to the second half of 2018, but expansion costs will still be realized. That will keep a lid on both the top and bottom line in the immediate months ahead.

The second reason is year-over-year comparisons. Easter — a busy shopping event for many retailers around the globe — was in the first quarter this year versus the second quarter in 2017. The spring months are therefore not going to be an apples-to-apples comparison since there is no holiday shopping bump for 2018.

In spite of the lumpy sales and profit growth, management said it’s still on track to hit its full-year goals. In response, an analyst on the earnings call raised a fair question: If full-year expectations are known, why not share that instead of sharing the volatile quarterly guidance that investors keep tripping over? CFO John Vandemore responded:

There are always impacts from the market. We are not, believe it or not, running our business to guide you guys expertly one quarter and then the other. We are running our business to grow the top line, ensure ultimately we have the structure in place to be a growth engine for the $6 billion that we are aiming for in 2020, and make sure that our profitability is on par with the industry.

Skechers is a growth company, not a slow-and-steady one for conservative investors. Sales and profits, which feed into stock valuation, can be a bumpy ride. Quarterly results fluctuate but so do annual results, too. In other words, learn to roll with the punches when they come.

That doesn’t mean there won’t be victories. Even after the big drop, shares of Skechers are still up about 30% from multi-year lows in the fall of 2016 (which is when I made my initial purchase).

The big takeaway is that, when it comes to growth stocks, business can be volatile. That makes focusing on the long term that much more important, especially after a big tumble. Skechers is making a push for $6 billion in annual revenue by 2020, a 50% increase over full-year 2017. Even when factoring for the slowdown in the second quarter, the shoemaker is still on track to hit that goal.

Of course, it’s possible that this is an early sign that sales will be sluggish for more than just a three-month stretch. But that’s part of the risk of investing in these types of stocks, and Wall Street has decided to lower the price of shares just in case. In the meantime, assuming all is well at Skechers, investors have a chance to buy a high-growth endeavor at bargain prices.