Hipsters and health nuts the world over want more avocados for their toast and blueberries for their everything. Enter Chilean grower Hortifrut SA.

The Santiago-based company has ramped up deal-making and expansion plans to boost production and meet demand. Now it’s poised to close a deal announced in October to pay $160 million for Peru’s Grupo Rocio, that country’s largest blueberry producer.

Together with expansion plans in Mexico, the U.S. and China, that move will more than double berry production, including blueberries, to greater than 100 million kilograms (220 million pounds) in the current harvest from the previous year, Victor Moller, the company’s chairman, said in a phone interview. And there’s more to come.

"People laugh at me because I still think that this company is in its infancy," Moller said of the 38-year-old company that went public in 2012. "But it’s a baby with a huge growth potential."

Investors are happy so far, considering Hortifrut is up more than 500 percent since the IPO, compared to a 29 percent increase for the benchmark IPSA Index in Chile in the same period. Revenue has more than doubled to $367 million since before the listing, though it slipped by 9 percent in 2017, according to data compiled by Bloomberg. The stock was unchanged today at 1,970 pesos while the IPSA advanced 0.4 percent.

Worldwide, some 1.7 million tons of blueberries were produced last year, two and a half times the number in 2000, according to consultancy fresh4cast.com. That should reach 2 million tons in two years. The U.S. is the biggest producer of blueberries, followed by Canada and Chile, which is the largest global exporter.

"When it comes to demand, it’s really inelastic," Fumasi said. "People just have to have their blueberries."

And the Chinese are willing to pay.

In January and February, the peak of the Chilean harvest, blueberries exported to the port of Jiangnan in China were sold at an average of $10.04 per kilogram, according to data from agricultural consultant iQonsulting. On the U.S. East Coast, the average price was $6.40 per kilogram.

This is Why Chile Likes China More 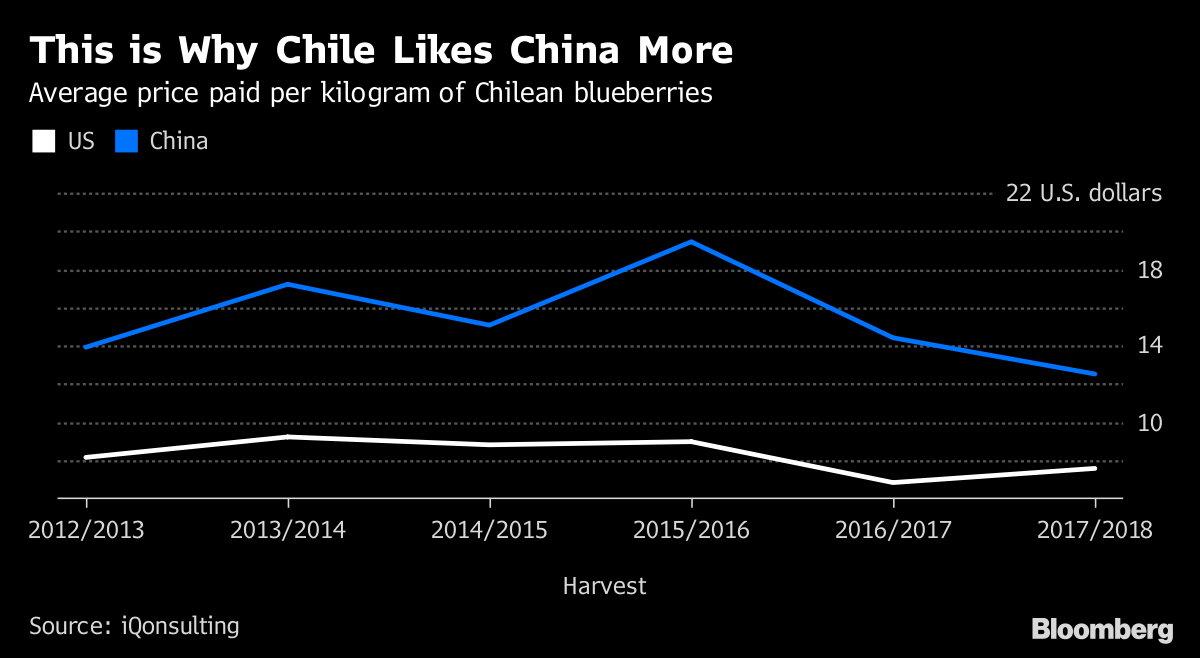 With so much demand, Hortifrut’s eyeing more acquisitions, Moller said.

"We’re always trying to defend our leading position in the world," Moller said. "It’s part of our business model, to grow in partnerships with leading companies either in production distribution, genetic engineering, processing or logistics."

"We want to plant as much as we can as China will be a market as important as the U.S.," Moller said. "Europe is just starting to consume blueberries, it has a lot more to grow."

"Chile is shifting more and more of its volumes towards China," Ciobanu said. "Prices paid in Asia are coming down a bit as the market matures, but there’s still a gap above what North America pays."

Hortifrut isn’t solely betting on blueberries. It’s also part of a worldwide joint venture called Naturipe Avocados, which distributes the pitted fruit that is deemed by some as "green gold."

"Avocados are one of the most interesting products," Moller said. "We already sell to the best 500 clients in the world and there’s an interesting opportunity in selling healthier products."