Reports suggest Restasis had annual sales in Canada of $46.5 million. The Restasis patents were invalidated in U.S. Federal Court due to obviousness last year. Teva’s launch could have implications on the possibility of a generic version of the drug being approved in the U.S.

Restasis Is Of Extreme Importance To Allergan

Restasis is highly-important to Allergan. The drug generated $274 million in revenue in Q1 2018, down 15% Y/Y; $18 million was generated internationally. Despite the decline Resasis is still Allergan’s second-leading drug at over 7% of total revenue. 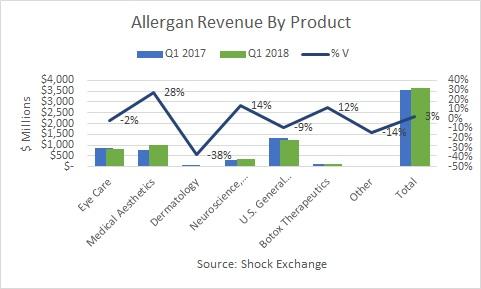 Allergan’s total Q1 2018 revenue was up 3% Y/Y. It was stymied by a 2% decline in Eye Care and and a 9% decline in U.S. General Medicine. U.S. General Medical is the company’s largest segment in terms of revenue and is facing a loss of exclusivity (“LOE”) for several products. Eye Care includes Restasis, and will likely fall further once Teva’s generic Restasis kicks in. Generic Restasis could reduce Restasis sales in Canada by 50% on a decline in price alone. Though Canada would represent only 4% of total revenue, generic competition would provide a headwind to Allergan’s second-largest product when the company could least afford it.

AGN is off by over 30% Y/Y and management is seeking strategic options to drive the share price higher. I believe it may seek to monetize some or part of its Botox franchise which could spike the stock; however, it must also keep other parts of its operations from eroding to make any short-term gains last.

Potential Impact On Restasis In The U.S.

Allergan is currently locked into a patent battle in the U.S. with Mylan (MYL) and Teva pursuant to Restasis. An inter partes review (“IPR”) brought on my Mylan could be completed within months. If Mylan wins the IPR then it could finally clear a path for generic Restasis in the U.S. It would be odd for Canada to have a generic version of high-priced Restasis and U.S. consumers not also have access to it. Canada’s generic approval could (1) pressure U.S. courts to disallow Allergan and the St. Regis Mohawks’s bid to block Mylan’s patent challenge and (2) it could pressure the FDA to approve generic Restasis as soon as possible.

Canada’s approval of generic Restasis could pressure U.S. regulators and/or lawmakers to approve a generic version by the second half of 2018 or sooner. Generic Restasis could drive down Allergan’s revenue and EBITDA, and hurt the stock regardless of any strategic review. Sell AGN.