Though it was hardly a secret going into April that iPhone X sales have come under pressure following a strong start, chip giant Taiwan Semiconductor’s (TSM) guidance and earnings call commentary suggests the slump is even more pronounced than many previously believed.

And that in turn creates a fresh argument for Apple (AAPL) taking a page from the original iPhone’s playbook and cutting the X’s price. Particularly given what Apple’s 2018 iPhone launch plans reportedly look like.

And on its earnings call, TSMC lowered its full-year revenue growth forecast to 10% from a range of 10% to 15%. The company blamed both smartphones pressures and — in comments that are relevant to Nvidia (NVDA) and AMD (AMD) investors — “uncertainty in cryptocurrency mining demand.”

TSMC fell 5.7% on Wednesday in response to the news. Apple, which relies on TSMC to manufacture its A-series system-on-chips (SoCs) and various other chips, fell 2.8%. iPhone/iPad chip suppliers such as Cirrus Logic (CRUS) , Broadcom (AVGO) , Skyworks (SWKS) and Qorvo (QRVO) , some of which also rely on TSMC, registered 3%-plus drops.

Chip stocks in general had a rough day: The Philadelphia Semiconductor Index closed down 4.3%. Chip equipment makers joined the rout even though TSMC hiked its full-year capital spending budget by $1 billion to a range of $11.5 billion to $12 billion. Aside from TSMC’s guidance, markets may have been rattled by Chinese opposition to the Qualcomm-NXP deal amid heightened trade tensions, given its potential implications for other chip M&A transactions. 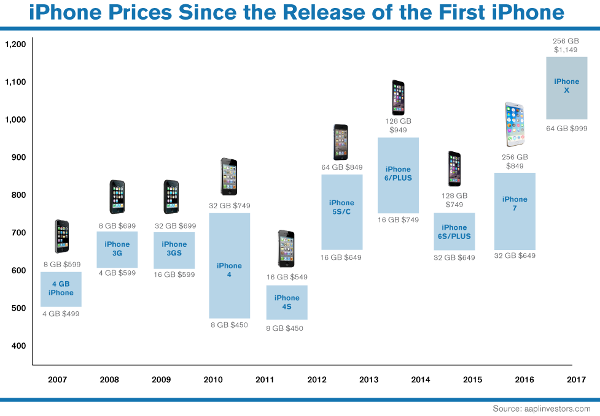 As far as Apple and its suppliers go, it’s worth noting that when asked on the call about smartphone trends, TSMC singled out the “very high-end smartphone” market as a weak spot. By contrast, the company suggested (in line with some media reports) that recently-pressured Chinese smartphone demand is starting to pick up a little. Though TSMC has some exposure to Samsung’s high-end phone sales, its iPhone exposure is easily higher.

In addition, when asked about whether TSMC still expects 10% of its 2018 sales to come from chips relying on its next-gen 7-nanometer (nm) manufacturing process, management stated 7nm’s share could be “one point off” due to smartphone weakness. Apple’s next A-series SoC is expected to rely on the process and account for the lion’s share of TSMC’s 2018 7nm revenue.

The Q2 guidance and commentary don’t bode well for Apple’s June quarter guidance, which (assuming custom holds) will be provided in its March quarter report on May 1. Expectations aren’t especially high: On average, analysts polled by FactSet expect June quarter revenue to rise 15% annually to $52.2 billion, but for iPhone shipments to rise by just 2 million to 43 million. However, TSMC’s guidance suggests some downside is possible. Especially if the smartphone weakness it’s seeing is centered around the iPhone X, which naturally carries higher average selling prices (ASPs) than other iPhone models.

Meanwhile, the 7nm commentary fits with supply chain reports pointing to tempered expectations for this fall’s iPhones, even though multiple reports state three iPhones will be launched — 5.8-inch and 6.5-inch iPhone X successors and a cheaper, 6.1-inch, LCD-based iPhone. RBC’s Amit Daryanani has reported Apple suppliers expect 80 million to 90 million next-gen iPhone units to be made during the second half of 2018, below year-ago expectations for 100 million to 120 million iPhone 8 and X units during the second half of 2017.

All of that raises fresh questions about how much the iPhone X’s steep pricing is crimping demand for a product whose looks and feature set have yielded strong reviews and (like many of its predecessors) high customer satisfaction rates. Especially in the many foreign markets where the phone’s starting price is above $1,200, if not $1,300, due to local taxes and/or tariffs.

Of course, Apple has been quite averse from 2008 onwards to cutting iPhone prices before a successor model is released. But between the iPhone X’s pricing and sales pressures, as well as Apple’s reported iPhone roadmap, the current situation is pretty unique.

Jim Cramer and the AAP team hold positions in Apple, Nvidia and Broadcom for their Action Alerts PLUS Charitable Trust Portfolio. Want to be alerted before Cramer buys or sells AAPL, NVDA or AVGO? Learn more now.

This column originally appeared on Real Money, our premium site for active traders. Click here to get more great columns like this.