Sumitomo Mitsui Trust Holdings Inc. boosted its stake in SS&C Technologies (NASDAQ:SSNC) by 1.2% in the 1st quarter, according to the company in its most recent 13F filing with the Securities and Exchange Commission. The institutional investor owned 497,308 shares of the technology company’s stock after purchasing an additional 6,020 shares during the period. Sumitomo Mitsui Trust Holdings Inc. owned approximately 0.21% of SS&C Technologies worth $26,676,000 at the end of the most recent reporting period.

SS&C Technologies (NASDAQ:SSNC) last posted its quarterly earnings data on Tuesday, May 1st. The technology company reported $0.53 earnings per share for the quarter, missing analysts’ consensus estimates of $0.54 by ($0.01). The firm had revenue of $434.60 million during the quarter, compared to analysts’ expectations of $433.77 million. SS&C Technologies had a net margin of 19.65% and a return on equity of 15.43%. The business’s quarterly revenue was up 6.1% on a year-over-year basis. During the same period in the previous year, the company earned $0.44 earnings per share. sell-side analysts expect that SS&C Technologies will post 2.27 earnings per share for the current fiscal year.

Want to see what other hedge funds are holding SSNC? Visit HoldingsChannel.com to get the latest 13F filings and insider trades for SS&C Technologies (NASDAQ:SSNC). 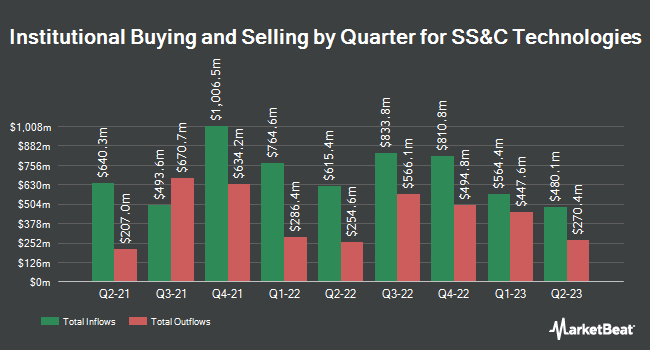 SS&C Technologies (NASDAQ:SSNC) saw unusually-high trading volume on Friday . Approximately 101,538 shares traded hands during mid-day trading, a decline of 93% from the previous session’s volume of 1,550,918 shares.The stock last traded at $49.19 and had previously closed at $49.23.

SS&C Technologies (NASDAQ:SSNC) last posted its quarterly earnings data on Tuesday, May 1st. The technology company reported $0.53 EPS for the quarter, missing analysts’ consensus estimates of $0.54 by ($0.01). SS&C Technologies had a net margin of 19.65% and a return on equity of 15.85%. The firm had revenue of $434.60 million for the quarter, compared to analysts’ expectations of $433.77 million. During the same quarter last year, the company posted $0.44 EPS. The firm’s revenue was up 6.1% compared to the same quarter last year. analysts expect that SS&C Technologies will post 2.27 earnings per share for the current fiscal year.

In other SS&C Technologies news, SVP Paul Gerard Igoe sold 112,000 shares of the business’s stock in a transaction dated Friday, May 4th. The stock was sold at an average price of $48.17, for a total transaction of $5,395,040.00. Following the completion of the sale, the senior vice president now owns 112,000 shares of the company’s stock, valued at $5,395,040. The transaction was disclosed in a filing with the Securities & Exchange Commission, which is accessible through the SEC website. Insiders own 17.50% of the company’s stock.