Multinational department store operator Hudson’s Bay Company (NASDAQOTH:HBAYF) has been struggling for years as consumers gravitate to more-convenient retail options. Parts of the company are still delivering comp sales growth, including the Hudson’s Bay chain in Canada and Saks Fifth Avenue in the U.S. However, one piece of the Hudson’s Bay retail empire has been a consistent underperformer: the Lord & Taylor chain.

Lord & Taylor’s dreadful performance has been one of the key factors keeping Hudson’s Bay stock in a downward spiral. The company has announced several lucrative real estate sales since mid-2017, but the stock is still sitting near an all-time low and has lost two-thirds of its value over the past three years. 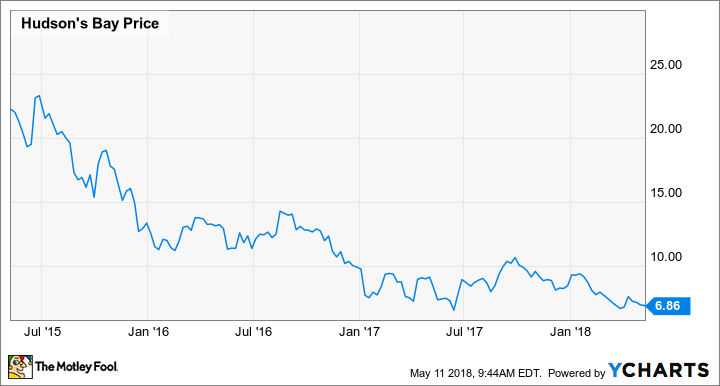 Hudson’s Bay finally seems ready to take decisive action to fix its Lord & Taylor problem. However, it isn’t clear yet what changes are contemplated.

These deepening losses come despite steady growth in comp sales at the Hudson’s Bay chain — which is benefiting from being the last national department store chain in Canada — and a recent sales rebound for Saks Fifth Avenue.

Hudson’s Bay’s European operations and its off-price division are probably responsible for the majority of the company’s recent losses. Still, sales have been plummeting at Lord & Taylor in recent years, as the tired chain has lost market share to other retail formats, as well as stronger department stores like Nordstrom (NYSE:JWN) and even Macy’s (NYSE:M). Lord & Taylor is almost certainly contributing to its parent company’s ongoing losses.

Activists have been pushing for change — with modest success

While Hudson’s Bay hasn’t earned an annual adjusted profit since 2015, it controls a massive amount of valuable real estate. By some accounts, it’s worth more than three times the company’s market value. As a result, like Macy’s a few years ago, Hudson’s Bay has become a target for activist investors.

About a year ago, Jonathan Litt of Land and Buildings Investment Management began lobbying Hudson’s Bay to sell any piece of real estate that isn’t generating profits commensurate with its value. He has also called for the company to sell its European division.

Hudson’s Bay management hasn’t shown any interest in Litt’s more radical proposals. Yet the company has started selling some of its real estate. Most notably, Hudson’s Bay struck a deal last summer to sell the Lord & Taylor flagship store in Manhattan for a hefty $850 million. It plans to lease back about a quarter of the building for a downsized Lord & Taylor store.

Hudson’s Bay has also sold the leases for two or three Lord & Taylor stores that were struggling to compete against Nordstrom, Macy’s, and Bloomingdale’s in the same malls. Finally, Hudson’s Bay has reportedly reached a deal to sell its Vancouver flagship store for around CA$675 million.

More changes are on the way

Back in February, Hudson’s Bay appointed a new CEO, Helena Foulkes. A month later, on the company’s fourth-quarter earnings call, Foulkes stated that she planned to spearhead a deep-dive analysis to understand what is wrong with the Lord & Taylor business. She indicated that all options are on the table for fixing it.

Hudson’s Bay has now hired an investment bank and a consulting firm to help it evaluate the Lord & Taylor business, according to Reuters. Management might be willing to sell the brand, but not at a bargain-basement price. Unfortunately, Lord & Taylor’s massive sales declines have sharply eroded its value. A recently disclosed credit card breach surely didn’t help, either. For now, Hudson’s Bay’s official stance is that Lord & Taylor still has meaningful growth opportunities. But it seems increasingly likely that management will consider shuttering the Lord & Taylor chain if its advisers can’t identify a credible path to profitability.

Dumping Lord & Taylor may be the best move

The recent struggles of Macy’s and Nordstrom show how staying ahead of fast-changing retail trends is a tough task even for the healthiest of department stores. Hudson’s Bay management has to oversee several different chains spanning the U.S., Canada, and a handful of countries in Europe. Some of these businesses (including Lord & Taylor) aren’t performing well.

Thus, there is a strong rationale for exiting the Lord & Taylor business so that management can devote more attention to the rest of the company.

If Hudson’s Bay can’t sell the chain for a reasonable price, it should have no trouble selling the underlying real estate, most of which is very attractive. It could also convert some of the stores in more affluent areas to the upscale Saks Fifth Avenue brand. This solution would provide a big cash infusion, reduce Hudson’s Bay Company’s losses, and free up management resources. That sounds far more promising than embarking on another uncertain turnaround plan at this juncture.