DekaBank Deutsche Girozentrale boosted its holdings in shares of Arch Capital Group (NASDAQ:ACGL) by 47.5% in the first quarter, according to the company in its most recent Form 13F filing with the Securities & Exchange Commission. The firm owned 39,362 shares of the insurance provider’s stock after purchasing an additional 12,684 shares during the period. DekaBank Deutsche Girozentrale’s holdings in Arch Capital Group were worth $3,431,000 as of its most recent SEC filing.

In other news, CFO Mark Donald Lyons sold 6,000 shares of the business’s stock in a transaction dated Wednesday, February 28th. The shares were sold at an average price of $89.39, for a total transaction of $536,340.00. The transaction was disclosed in a document filed with the SEC, which can be accessed through this link. Also, Director Brian S. Posner acquired 3,000 shares of the stock in a transaction dated Thursday, May 3rd. The shares were purchased at an average price of $78.63 per share, for a total transaction of $235,890.00. Following the completion of the purchase, the director now directly owns 24,439 shares in the company, valued at $1,921,638.57. The disclosure for this purchase can be found here. 5.10% of the stock is owned by insiders. 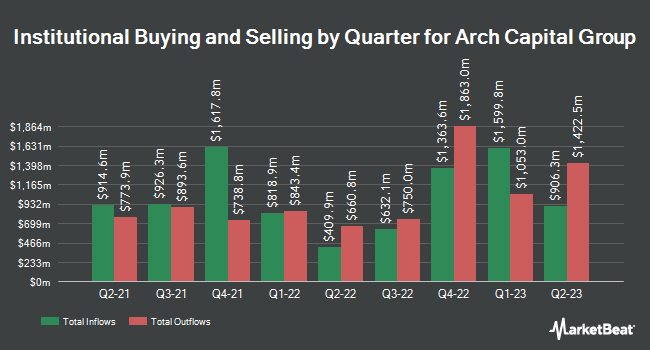