Government bond yields climbing and a shrinking gap between short-term and long-term Treasury rates have prompted some consternation on Wall Street, driving equity prices lower as investors fret about what these dynamics mean for U.S. economic growth as it enters its ninth year of expansion.

Fears about a so-called flattening yield curve have taken center stage, with investors fixated on the gap between the 2-year Treasury notes
TMUBMUSD02Y, +1.40%
and the 10-year benchmark
TMUBMUSD10Y, +1.67%
which on Tuesday touched the narrowest point41 percentage pointsin more than a decade.

The yield curve is often tracked as a measure of sentiment about the economys overall health. In a normal environment, the yield curve steepens because investors tend to demand a higher yield for lending further into the future, while a flattening curve is read as a sign that investors are worried about the longer-term outlook. An inverted curve, where shorter-dated yields exceed those for longer-dated debt, a dynamic known as yield-curve inversion, rings alarms because it has faithfully preceded all recessions since 1960.

The threat of such an inversion has even caught the attention of Federal Reserve officials, with St. Louis Fed President James Bullard saying that If the Fed goes ahead and raises rates and the 10-year rate does not cooperate, the yield curve could invert later this year or in 2019. Bullard added that the yield-curve signal should be taken seriously. Bullard isnt presently a voting member of the policy-setting Federal Open Market Committee.

Not everyone is freaking out about that possibility, however.

In a Friday research note, Raymond James analyst Andrew Adams argues that not every narrowing yield spread between the 2s and 10s results in an inversion, and that some of the best stock-market performance has come amid such flattening yield trends:

Heres a chart provided by the Raymond James analyst by way of Stockcharts.com: 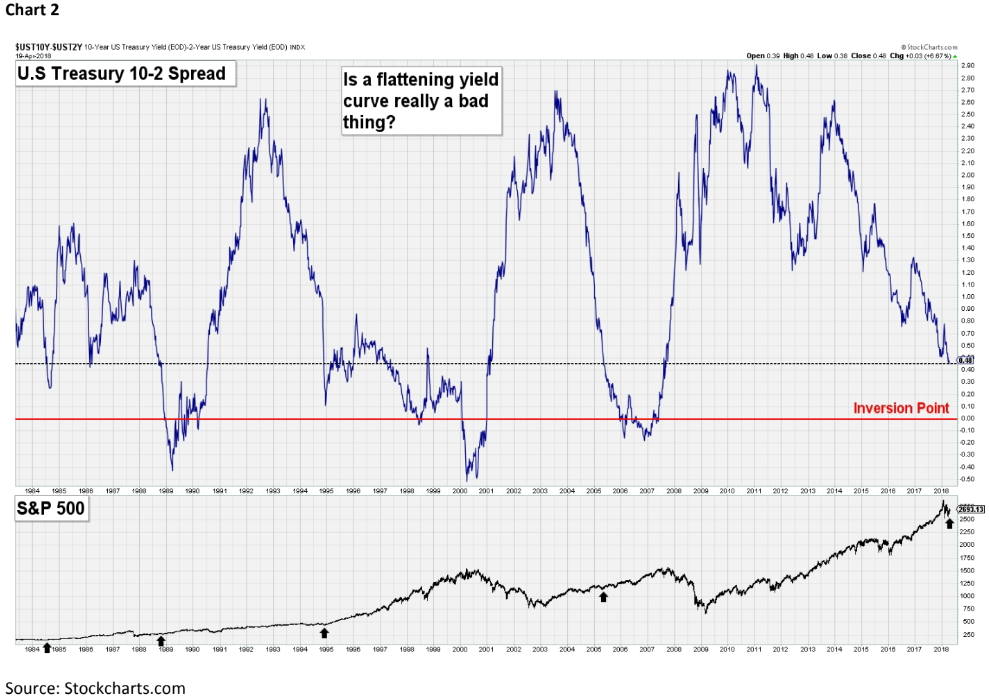 The fear of rising bond yields

The steady climb of the 10-year Treasury yield to its highest level since 2014 on Friday unsettled the markets, sending ripples through the U.S. dollar and stocks, even as the yield curve steepened somewhat.

On Friday, selling pressure in U.S. equity benchmarks intensified late in the day as the yield on the 10-year Treasury note hit a more-than-four-year high.

Meanwhile, the dollar
DXY, +0.40%
strengthened as the 10-year flirted with the psychologically important 3% mark, which can drive demand from buyers looking to invest in the buck with the promise of yields that exceed dividends for stocks.

Yields have been a pivot point for the markets since back in February when the 10-year made another break toward 3% before backing off. The higher borrowing costs it implies for corporations and the competition that bonds would offer against equities is part of the reason that investors have paused when Treasury rates pitch higher.

Higher rates can be stomached by the market if they suggest that the economy is genuinely improving, but can cause anxieties if there are questions about growth.

Busiest week of corporate earnings ahead

That is the big question. I think investors want to see more. Next week, well have a broader swath of earnings from all sectors, and we need to focus on the tech sector, Quincy Krosby, chief market strategist at Prudential Financial, told CNBC during a Friday interview.

Lindsey Bell, investment strategist at CFRA, told MarketWatch that nearly 80% of the companies that have reported so far have beaten earning estimates, while about four out six companies have outperform on sales. Much better than historical standards of 66% and 55%, respectively, she wrote.

Thus far, earnings growth is tracking at 17.5% year-over-year for the index, better than the 16.3% expected at the start of the earnings season.

Despite the positive results, stocks have not reacted favorably. Companies that beat on both the top and bottom line have only seen their stocks rise 0.5% on the day of the report, on average. But companies that have missed EPS expectations and beat sales expectations have endured a 4.4% decline on average on the day they report results.

Looking ahead, next week 37% of the index will report results, making it the busiest week of this earnings season, Bell said. Specifically, 179 S&P 500 companies (including 12 Dow 30 components) are scheduled to report results for the first quarter, according to FactSet data.

Alphabet earnings: Google will offer a gander at its Uber investment

Case-Shiller house price index for February due at 9 a.m.

Consumer confidence for April due at 10 a.m., with 126 forecast

Thursday (all reports at 8:30 a.m. unless otherwise denoted)

Americans donate more than $1 billion a day. Here's how

Mark DeCambre is MarketWatch’s markets editor. He is based in New York. Follow him on Twitter @mdecambre.

Mark DeCambre is MarketWatch’s markets editor. He is based in New York. Follow him on Twitter @mdecambre.

We Want to Hear from You