The Swiss National Bank kept interest rates at a record low, saying the franc remains “highly valued” and that another bout of financial market stress could spark a fresh rally.

In a policy statement on Thursday, it noted the currency’s recent appreciation because of Italy’s political turmoil, said growth risks are to the downside and that its current policy of negative rates and intervention threats “remain essential.”

While the Swiss economy has grown apace recently, the central bank’s policy is aimed at keeping pressure off the franc, popular among risk-averse investors.

The franc was little changed at 1.15252 per euro as of 9:46 a.m. It briefly touched the symbolic 1.20 level in April, before reversing course last month. That was partly due to events in Italy, which revived memories of Europe’s debt crisis, when the SNB spent billions of francs intervening.

“In light of political uncertainty in Italy, we have since seen countermovement, particularly against the euro. The situation on the foreign exchange market thus remains fragile, and the negative interest rate and our willingness to intervene in the foreign exchange market as necessary therefore remain essential. These measures keep the attractiveness of Swiss franc investments low and ease pressure on the currency.”

There are other reasons for President Thomas Jordan to stay on high alert, including a full-blown global trade war that’s looming closer by the day and which central banks around the world have cited as a major risk to the outlook. The SNB said the risks to growth are “more to the downside.”

“Chief among them are political developments in certain countries as well as potential international tensions and protectionist tendencies,” the central bank said. Jordan will hold a press conference at 10 a.m. in Bern.

The SNB also left its deposit rate at minus 0.75 percent on Thursday, as forecast by economists in a Bloomberg survey. The rate has been at that record-low level since 2015, when the SNB abolished its cap on the franc of 1.20 per euro in the face of European Central Bank quantitative easing.

The decision comes exactly a week after the ECB made the keenly anticipated announcement to end bond purchases in December. However, policy makers in Frankfurt said borrowing costs won’t rise until the second half of 2019. 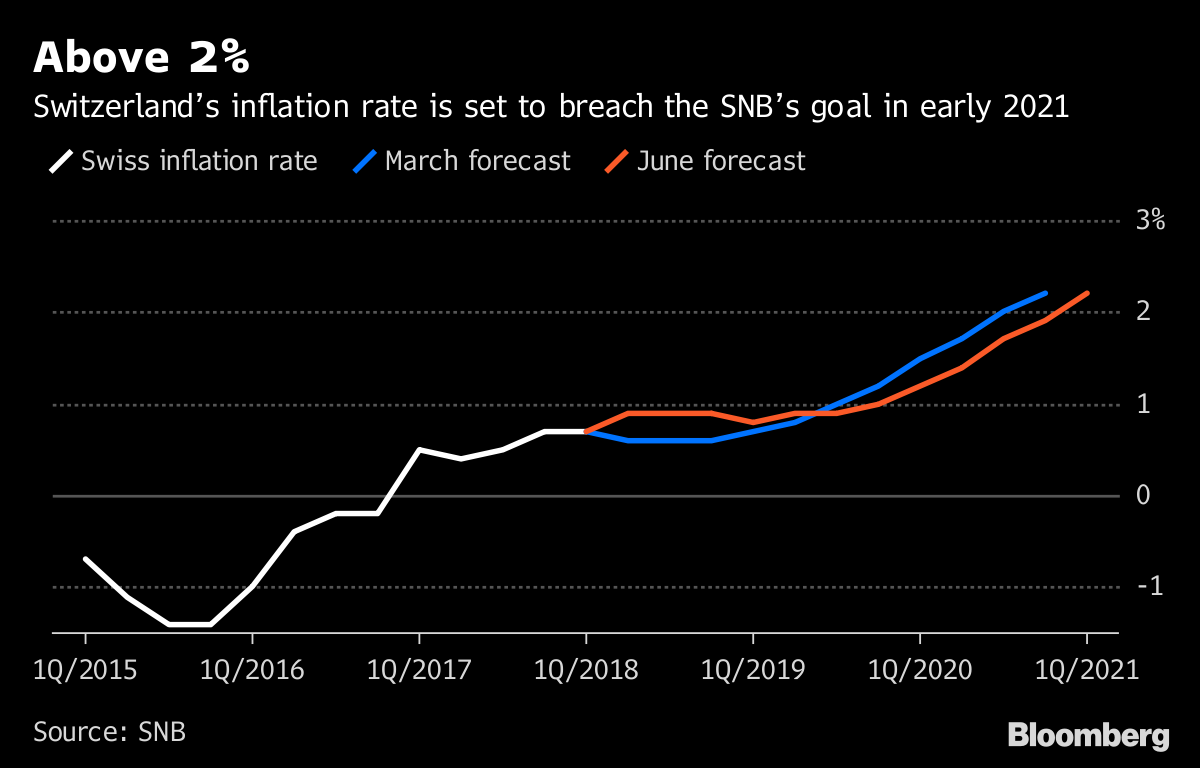 With the SNB aiming to maintain a rate differential with the ECB, that may tie Jordan’s hands when it comes to policy tightening. Moreover, the inflation outlook doesn’t call for immediate action. The central bank, whose mandate is to keep price growth below 2 percent, sees inflation at 0.9 percent this year and next. It raised the 2018 outlook because of higher oil prices, but cut 2020 to 1.6 percent from 1.9 percent.

The SNB also kept its target range for three-month Libor at between minus 0.25 percent and minus 1.25 percent.