Buyout titans are benefiting as banks get less fearful about leveraged buyouts.

When Leonard Green & Partners recently decided to buy a majority stake in SRS Distribution Inc., banks led by Bank of America Corp. and Barclays Plc sought loans and bonds to help finance the $3.6 billion buyout. Investors have so far been willing to increase debt for the building supply company to more than seven times a measure of earnings, a level that just a few years ago would have raised regulators’ eyebrows.

That deal isn’t unusual. Debt in leveraged buyouts is creeping above the six times level that regulators said in 2013 was potentially too risky, after commitments to private equity deals scorched banks during and after the crisis. The average company in an LBO had borrowings equal to 6.4 times earnings before interest, taxes depreciation and amortization in 2018, according to Fitch Ratings. Last year it was 6.2 times Ebitda and in 2016, it was 5.9 times. 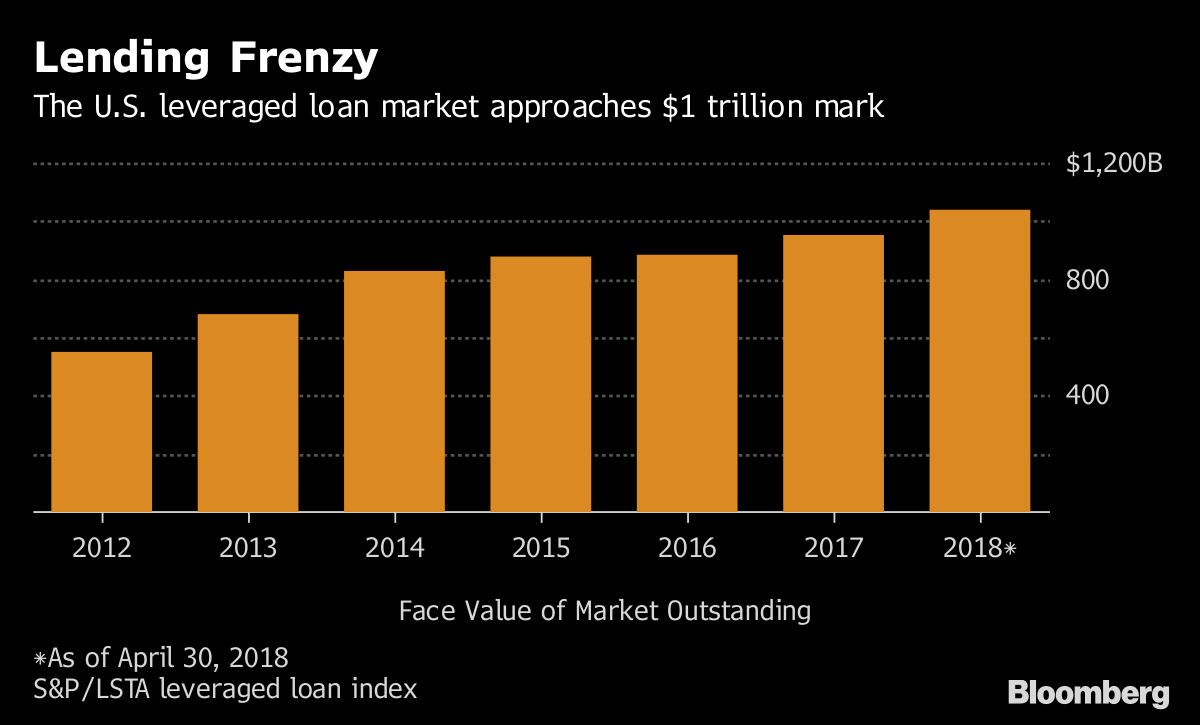 The higher debt burdens are a symptom of memories getting shorter as the economic expansion grows longer. Regulators this year have loosened the reins on restrictions for individual deals, and leveraged buyouts have grown more leveraged.

“Private equity firms and lenders are both stretching too much,” said Dan Zwirn, chief investment officer at Arena Investors. “It’ll end badly as these things always do. Ultimately water finds its level.”

Now, to paraphrase former Citigroup Chief Executive Officer Chuck Prince, banks are dancing with more gusto than they have in years. Earlier this year two key regulators, U.S. Comptroller of the Currency Joseph Otting and Federal Reserve Chairman Jerome Powell, separately said that the guidelines they offered before, including the six times level, were just guidance, and not hard-and-fast rules.

The U.S. leveraged loan market has grown to just over $1 trillion, in part due to buyouts. Loans have been growing riskier by other measures too, including the quality of investor safeguards known as covenants.

“Deals have become much more flexible and aggressive which allow sponsors to add on more debt,” said Philip Lee, an analyst at Covenant Review. “It’s an issuer’s market.”

Private equity firms benefit from adding more leverage to their investments because it reduces the equity needed, boosting returns as asset valuations hover near all-time highs. Those high prices in equity markets have weighed

The market is not as frothy as it was before the financial crisis, when private equity firms engineered massive buyouts like radio broadcaster Clear Channel and Texas power producer Energy Future that ended up having to restructure in bankruptcy. Clear Channel’s 2008 buyout left the company with debt levels equal to more than eight times its Ebitda. Now known as iHeartMedia Inc., the radio company filed for Chapter 11 protection in March.

And with the U.S. stock market having surged 22 percent since the end of 2016, equity valuations are high, which according to Fitch Ratings has weighed on LBO volumes.

The finance proposal for the SRS deal said the company had Ebitda for the 12 months through January of $245 million including adjustments known as “addbacks,” according to the people with knowledge of the matter. That compared with actual Ebitda under generally accepted accounting principles of about $183 million.

The company sold $350 million of bonds Thursday, and increased the size of its planned loans by $30 million to $1.33 billion. SRS has a “strong track record of using earning growth to deleverage,” following acquisitions, according to a report from S&P Global Ratings, which reiterated its B rating for the company, five levels below investment grade.

SRS didn’t return calls and emails seeking comment. Leonard Green declined to comment, as did Barclays, which led the financing of the bonds in the proposal, and Bank of America, which led the $1.3 billion loan proposal.

“The rules of the game have changed,” said Justin Smith, managing director at Xtract Research, which dissects and analyzes debt documents. “Leverage above seven times is somewhat of a recent phenomenon.” In certain cases, like if a company is strong, there may be room for that much leverage, he added.

Even in leveraged loan deals where private equity isn’t involved, debt levels are sometimes above six times. Valeant Pharmaceuticals International Inc. this week increased a loan offering to almost $4.6 billion, and will have debt approaching eight times Ebitda this year as some of its patents expire, according to Moody’s Investors Service.

“The bank loan market reflects a widening gap between very strong demand technicals and underlying fundamentals which are, at best, unchanged and in many cases worse,” said Andrew Curtis, head of the investment team for Z Capital Credit Partners.