Toronto-based Stars Group will pay cash and stock to owners CVC Capital Partners and Sky Plc, it said Saturday in a statement. The operator of PokerStars estimates it would get about a third of its revenue from sports, the fastest-growing online gaming segment, including recent acquisitions in Australia.

The agreement calls on Stars Group to pay $3.6 billion and approximately 37.9 million newly issued common shares based on the closing price of its common stock on April 20. Stars Group said it has obtained debt financing of approximately $6.9 billion, including $5.1 billion of first lien term loans, $1.4 billion of senior unsecured notes and a $400 million revolving credit facility. The proceeds will be used for the cash portion of the deal, as well as to refinance the company’s existing first lien term loan and repay SBG’s outstanding debt, it said.

After its failed attempt to take control of Sky-rival William Hill Plc, Stars Group is gaining a significant foothold in the U.K. — the largest regulated gaming market — and a trove of potential new customers for its online casino and poker offerings. The acquisition also helps accelerate Ashkenazi’s strategy to decrease reliance on the unstable poker business, which accounted for two-thirds of revenue last year.

From Poker King to Gaming Giant

Note: as a percentage of revenue, 2017 and 2017 if recent acquisitions were included 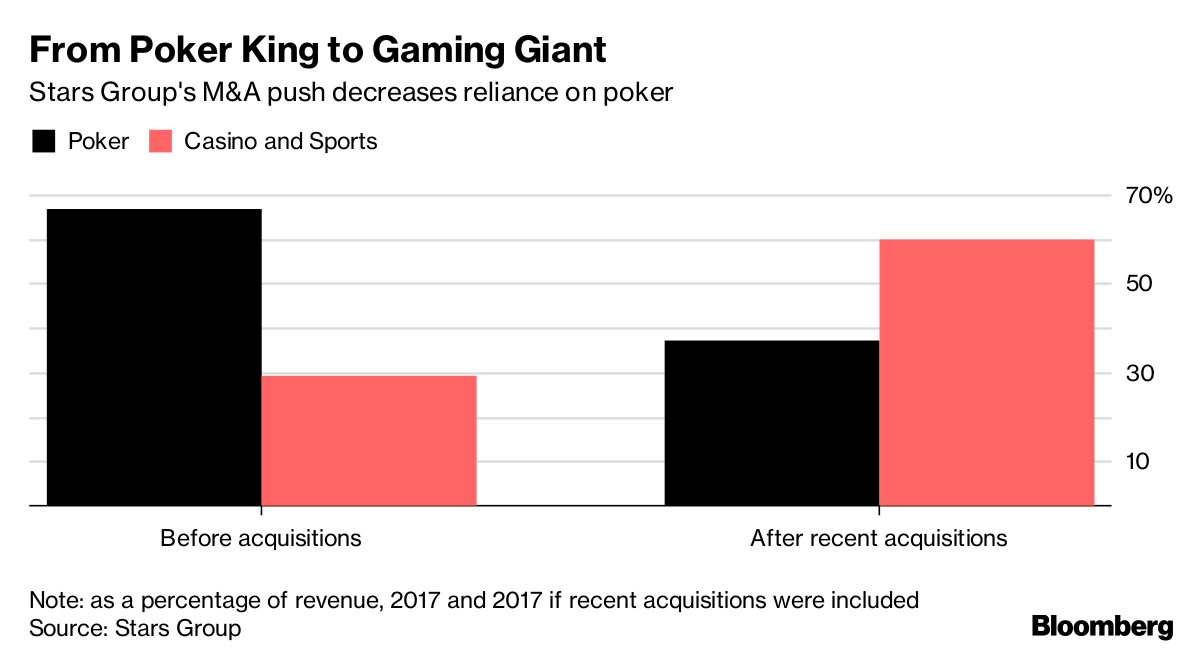 “The strategic fit is very good, the valuation is reasonable for a fast-growing company,” said Simon Davies, an analyst at Canaccord Genuity in London. “And the combined company will be better placed to exploit the opening of the U.S. sports-betting market.”

Betting on sports in some form is legal in four U.S. states. That could change as the U.S. Supreme Court weighs New Jersey’s attempt to have a 1992 law banning sports betting struck down as unconstitutional. If the court agrees, it could trigger a wave of states legalizing betting on football, basketball and other competitions.

Private equity firm CVC agreed to acquire a controlling stake in Sky Betting from Rupert Murdoch’s Sky in 2014. Canaccord’s Davies says the betting company, which gets more than 80 percent of its revenue from mobile devices, “has performed spectacularly” despite concerns of a tighter regulatory environment in the U.K.

The deal will also bring Sky a cash infusion as it is targeted for takeover by both 21st Century Fox Inc. and Comcast Corp. While Fox awaits a U.K. regulatory decision on its bid, Comcast is preparing to formalize its own offer after making a preliminary one at a premium to Fox’s, setting the stage for a bidding war.

The agreement follows a move last month by Stars Group to take a bigger slice of Australia’s CrownBet Holdings Ltd., which subsequently bought the Australian unit of William Hill.

Ashkenazi signaled last year that he’d be on the hunt for targets after focusing on paying down debt from the 2014, $4.9 billion acquisition of PokerStars that made the company, then called Amaya, the world’s largest online poker business. Ashkenazi took over the top job from founder David Baazov — who resigned in August 2016 to fight insider-trading charges — and built up a new management team.

(An earlier version of the story corrected Sky Betting & Gaming’s name, and the month of the CEO change.)

— With assistance by Rebecca Penty, and Kenneth Pringle