Thompson Siegel & Walmsley LLC reduced its stake in Cowen Group (NASDAQ:COWN) by 6.3% during the 1st quarter, according to its most recent 13F filing with the Securities & Exchange Commission. The fund owned 750,063 shares of the financial services provider’s stock after selling 5

Other institutional investors have also a

Cowen Group (NASDAQ:COWN) last announced its quarterly earnings data on Thursday, April 26th. The financial services provider reported $0.79 EPS for the quarter, beating analysts’ consensus estimates of $0.63 by $0.16. Cowen Group had a negative net margin of 5.91% and a positive return on equity of 4.33%. The company had revenue of $241.50 million during the quarter, compared to the consensus estimate of $220.06 million. During the same quarter last year, the firm posted $0.19 EPS. The company’s quarterly revenue was up 110.1% on a year-over-year basis.

Cowen Group declared that its Board of Directors has approved a share repurchase plan on Thursday, February 15th that permits the company to repurchase $23.60 million in shares. This repurchase authorization permits the financial services provider to buy shares of its stock through open market purchases. Shares repurchase plans are generally an indication that the company’s board of directors believes its stock is undervalued.

Want to see what other hedge funds are holding COWN? Visit HoldingsChannel.com to get the latest 13F filings and insider trades for Cowen Group (NASDAQ:COWN). 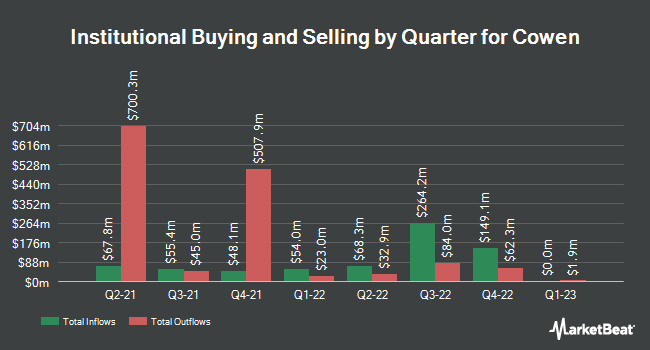