Over the course of the past few months, I’ve voiced bullishness on General Electric Company (NYSE:GE). Some of the calls were early, while the more recent table-pounding in favor of GE stock was ideally timed. As I said from the beginning, though the stage was set, General Electric stock was going to be a volatile mess for the foreseeable future.

Things are starting to change now, though, in terms of the chart’s timbre and the media’s rhetoric. The pros are all — more or less — starting to agree things really can’t get much worse for GE stock, and may well improve from here.

That’s not to say it’s smooth sailing going forward; things are still going to be choppy. It is to say, however, if you were hesitant to take a swing on General Electric then, you’ve got less reason to be nervous now.

Just for the record, yep, I’m well aware of how important the tepid energy market is to GE. I’m also well aware that its finance/insurance arm recently booked a huge write-down for what was ultimately a miscalculation of its actual risk. And yes, I even know Alstom is going to force General Electric to fork over a little more than $3 billion to acquire part of an energy business it probably doesn’t want to buy.

That’s a bitter pill for some investors to swallow. That doesn’t make it untrue, however. Sentiment is the key here.

The good news is shifting sentiment is actually pretty easy to track on a chart.

I’m a firm believer in giving credit where it’s due, so I’ll gladly acknowledge it was MarketWatch’s Tomi Kilgore that noted the most recent technical development with GE’s chart. I’ll only add a little updated perspective.

The short version of a long story: GE stock has cleared a couple of key hurdles in a convincing manner.

The longer version of the same story: General Electric stock has completed an upside-down-head-and-shoulder pattern. And the bullish gap it left behind back on April 20 has since been filled in, and that retracement didn’t rekindle the bigger picture downtrend. In fact, GE shares have started to edge higher again. 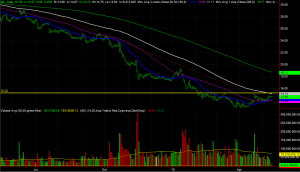 Both of those technical reads can’t be underscored enough. The simplest interpretation of them is the bears have had every opportunity to thwart the budding rebound effort, yet they’ve been unable to do so.

We do know where that line in the sand is though — $15.22, give or take a few cents. That’s where General Electric has hit resistance a few times since February, and that’s where the 100-day moving average line (gray) is now.

Yes, the 200-day moving average line (green) at $18.71 looms above. It could — and likely will — present problems for the stock if GE stock can muster an attack on it in the first place. But there are two things to note about that possibility:

(1) A move from here to there would still be a pretty decent trade.
(2) If that kind of momentum is allowed to develop in the midst of all the current doubt, the rebound (and short-covering) rally will be tough to stop.

It’s still a pretty big “if,” though it’s one that favors the bulls more than the bears — for the first time in a long time. More specifically, it’s one that merits the risk of getting in before the catalytic event, rather than after it. If you wait for GE stock to clear the $15.22-ish area, you may find yourself chasing it.

That’s not to say you can take your eyes off the trade. You can’t. Not even for a minute. It’s a trade that merits a real-time stop. The 20-day or 50-day moving average lines would be good guideposts, depending on your risk tolerance.

As they say, though, if you want the big rewards, you have to be willing to take some risks.

As of this writing, James Brumley did not hold a position in any of the aforementioned securities. You can follow him on Twitter