ConocoPhillips (NYSE:COP) has worked hard to distinguish itself from other oil companies over the past few years by shifting its focus from growing production to increasing shareholder value. That led it on a path to shed high-cost assets so that it could slim down to a company that could thrive at lower oil prices.

This strategy has worked remarkably well. That’s why shares are up more than 50% over the past year compared to about a 15% gain for the average oil stock as measured by the Vanguard Energy ETF. However, despite that dramatic outperformance, CFO Don Wallette stated on the company’s most recent quarterly conference callthat “we think our stock is well undervalued and has a lot of upside to it.” He gave two reasons why the company thinks its stock is a buy. 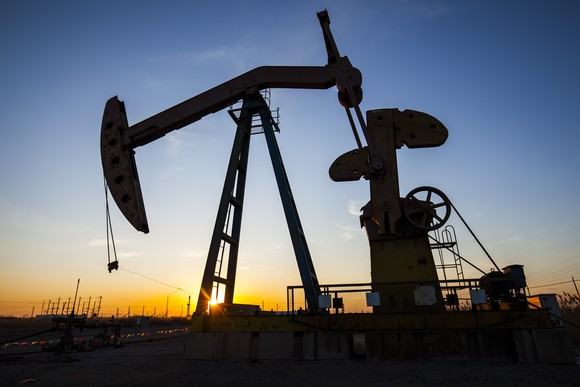 One of the factors ConocoPhillips’ CFO looks at when valuing the company’s stock is its ability to expand its cash flow margins in an environment like the one it’s in today. In the CFO’s view, cash flow can expand rapidly at current oil prices. However, the market isn’t giving the company any credit for this growth potential:

As that table shows, ConocoPhillips’ stock trades near the bottom of the barrel compared to peers on a cash flow basis even after its massive run-up over the past year. Typically low growth stocks are the ones that sell for a below average multiple. However, that’s not the case with ConocoPhillips.

The company spent the past several years repositioning so that it could run its business on $50 oil going forward. At that price point, the oil giant can generate enough cash to invest $5.5 billion per year in developing new wells, which should grow production at a 5% compound annual growth rate and cash flow at a 10% rate. Further, there would be enough money left over so that the company could return about 30% of its cash flow to investors via dividends and buybacks, with it targeting $1.5 billion in stock repurchases per year through 2020.

However, with crude currently in the $70s, ConocoPhillips is outperforming its plan and generating more cash than expected. Because of that, the company has already allocated another $500 million to its buyback in 2018 and could boost it even further if oil continues flying high. Those cash flow fueled repurchases should help raise ConocoPhillips’ valuation closer to the top of the peer group where it belongs. 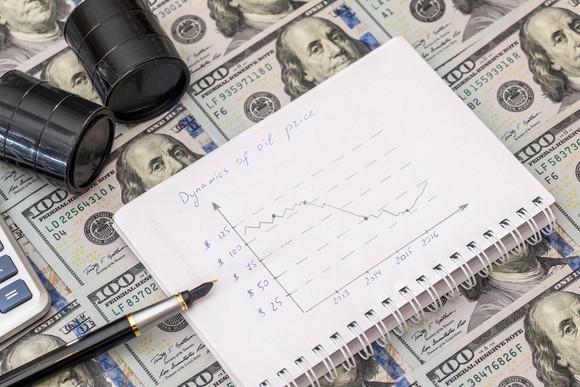 Another factor driving the CFO’s view that there’s more upside in the stock is its growth potential. However, the number he pointed out wasn’t the 5% annual rate the company expects production to rise. Instead, he highlighted the rate at which the company can increase output on a debt-adjusted share basis, which takes into account both share repurchases and debt reduction.

In the first quarter, for example, output was up 4% overall after adjusting for asset sales. However, it skyrocketed 26% on a debt-adjusted share basis because the company had repurchased more than $3 billion in stock and retired nearly $10 billion in debt over the past year. ConocoPhillips expects this accelerated growth rate to continue in 2018 as it keeps buying back stock and paying off debt. Its current forecast is that debt-adjusted production per share will rise 14% even though its actual rate will only expand about 5%. That ability to grow the per-share value of the company at a brisk pace should help drive the stock higher in the coming years.

Plenty of room to run

While ConocoPhillips’ stock has been red-hot over the past year, it’s still relatively undervalued compared to most peers. Add to that the fact that the company’s focus going forward will be on growing the value of its shares at a brisk pace, and it looks like it still has ample upside from here.