Just a few years ago, many investors were wondering if American Express (NYSE:AXP) would be able to rebound from the loss of its key Costcopartnership. Well, to put it mildly, Amex has done just that and more. The company’s 2017 card spending hit a record high, and recent high-end charge and credit card product launches have been highly successful.

So, is American Express a smart stock to buy as we head into summer? Here’s a rundown of American Express’ market opportunity, some of its key advantages, and specific factors that could drive growth going forward. 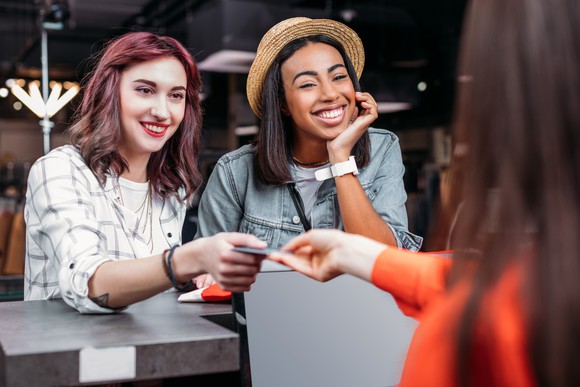 It’s a common misconception that the payments industry is nearing maturity — that is, most people who could use cards and other non-cash methods of payment are already doing so. This is completely untrue. In fact, there’s quite a bit of growth potential.

American Express, using data from Bernstein, says that there’s about $34 trillion of card-addressable spending in the market right now. This translates to a potential card-spend market that’s roughly 3.5 times the current size, and this is expected to grow significantly in the years ahead. In fact, by 2021, the addressable global market for consumer card spending is expected to grow by another $18 trillion.

Advantages over other credit card issuers

So why is American Express a smart way to play the growing payments industry? Why not simply invest in a bank that issues a lot of credit cards?

In other words, American Express is far less sensitive than many competitors to interest-rate fluctuations, and the company makes money on cardmember spending regardless of whether the customer carries a balance or pays it off. Furthermore, American Express has the advantage of an affluent customer base, which gives it the leverage to charge higher “swipe fees” than competitors. Specifically, the average Amex consumer cardholder spends roughly five times as much as the industry average.

Finally, Amex has a fantastic record of keeping expenses under control. In fact, the company’s revenue has risen by more than 50% since 2010, while operating expenses have actually fallen by 4%.

A renewed emphasis on high-end cards could pay off

Historically, American Express has emphasized high-end credit card products. After all, it was Amex that created the original Gold and Platinum charge cards, and even today, the company has more ultra-premium ($400 annual fee or more) credit cards than any of its peers, and also offers the famous Centurion card — which is better known as the “black card.”

In recent times, American Express has diversified its product offerings and now has credit and charge cards for all segments of the market. While this has been a smart strategy, competing ultra-premium credit cards from competitors such as JPMorgan Chase, Citigroup, and others have successfully taken some of the high-end market share.

Because of this, American Express has renewed its emphasis on its high-end credit card products. This past year, Amex revamped its flagship Platinum card with consumer-focused benefits such as $200 of annual Uber credits. And the company introduced four new Hiltonco-branded cards, including an ultra-premium offering.

So far, these efforts have been extremely successful. In the case of the refreshed Platinum card, new accounts are up a staggering 52% year over year. By the fourth quarter of 2017, card billings were up nearly 20% from the year before.

Speaking of the Platinum card, it also is worth mentioning that 47% of the new accounts started in 2017 were opened by millennials.

Amex smartly realizes that if it plans to maintain its leadership position in the high-end credit card market, it needs to succeed with the millennial generation. Millennials (generally defined as people born from 1982-2000) will be gradually entering their peak earning years over the next couple of decades, and their wealth will grow quickly. In fact, UBS has projected that the millennial generation could be worth as much as $24 trillion by 2020 — and this just could be the beginning.

In addition to incorporating millennial-targeted benefits (like free Uber rides) into its card products, Amex also is courting millennials with other unique features, such as its “Pay It Plan It” service, mobile concierge, and Amex Offers.

Finally, let’s take a look at valuation. Based on the company’s guidance, the stock trades for just 14.2 times 2018’s expected earnings, a remarkably cheap valuation for a company with these competitive advantages in a market with significant growth potential.

To sum it up, this is a cheap stock with huge opportunities ahead of it. I already own American Express in my stock portfolio, but I’m considering adding even more.