Riskier U.S. mortgages are creeping back into the bond market again.

The loans in question are nowhere near the toxic mortgages that brought down the financial system last decade. But they’re being made to people with lower credit scores and with more debt relative to their income. And in separate transactions tied to rental homes, Wall Street banks are putting together securities with fewer safeguards for investors — a potentially worrying sign of complacency.

“Underwriting starts out very strict and as time goes on, it’s kind of the proverbial frog in the pot of boiling water,” said John Kerschner, head of securitized products at Janus Henderson Group Plc, which manages $372 billion. “The heat keeps going up and up and then you realize, oh, this is really not good.”

The bonds linked to increasingly risky loans are known as credit-risk transfer securities. They are tied to mortgages that don’t have government guarantees, but that meet the minimum standards from U.S. backed-Fannie Mae or Freddie Mac, including down-payment requirements for borrowers.

Note: DTIs are based on low-LTV borrowers in series with two loan groups 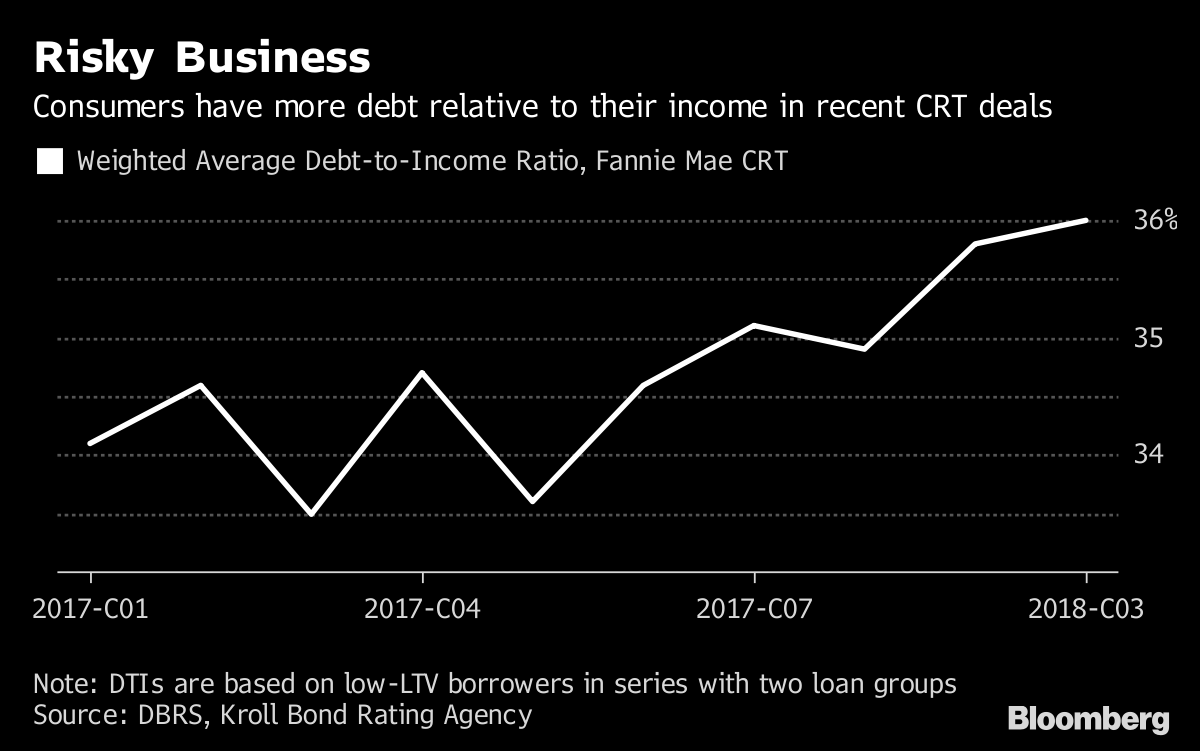 The borrowers are prime, and Fannie Mae and Freddie Mac essentially bundle the risk of the homeowners defaulting into the bonds so taxpayers don’t have to bear it. Measures of borrowers’ strength can decline due to changes in demand and banks’ and lenders’ underwriting, separate factors from Freddie Mac’s and Fannie Mae’s credit decisions.

One reason not to be alarmed is that the market for credit-risk transfer securities is around $50 billion now, a pittance in the $40 trillion market for bonds in the U.S. A spokeswoman for Fannie Mae said that the company continually monitors its loan acquisitions, and changes its policies based on what it sees, market conditions, and other factors.

But continued erosion in the credit quality of borrowers could eventually hurt the bonds, Kerschner said. And too much loosening for terms for mortgage bonds could give them a subprime mortgage-style taint and scare away potential buyers, he added.

The same sort of thing is happening all over capital markets: Strong demand for safe investments, such as loans and repackaged debt known as collateralized loan obligations, is resulting in investor protections being watered down, which in turn makes the instruments less safe. Other kinds of bonds linked to housing loans, including securities backed by single-family rental homes, are seeing a similar loosening of safeguards.

For CRT bonds, loans tied to Fannie Mae’s most recent two securities were made to borrowers with an average credit score of 743, down from 765 when the securities debuted in 2013. Consumer credit scores often range from 300 to 850, and while there’s no firm definition of subprime, 620 is sometimes seen as a cutoff for mortgages.

Other measures of borrowers’ risk are deteriorating too. Homeowners on the latest Fannie Mae CRT deal had debts equal to 36 percent of their incomes, up from 31.7 percent in the inaugural deal. Since last year, the bonds have also included loans from a mortgage finance program aimed at lower-income borrowers, which may create a higher default risk, according to Kroll Bond Rating Agency.

As long as economic growth continues apace and the housing market stays strong, borrowers are likely to continue making their home loan payments, and the high value of collateral for the mortgages will limit losses for lenders. Investors expect those trends to continue, and have been piling into credit-risk transfer and single-family rental bonds this year as a result. Greg Lippmann, who was early to see the storm brewing in home loan last decade, said in an interview earlier this month that he believes corporate debt and equities are much riskier than consumer-related debt in this cycle.

Those expectations have helped risk premiums on CRT securities shrink dramatically: on some of the bonds, the extra interest investors get compared with Treasuries has shrunk as much as 0.95 percentage point in the past 12 months, according to Bank of America Corp. strategists.

The creeping risk and shrinking compensation are what worry Janus’s Kerschner. He’s optimistic about the housing market, and is willing to buy "non-QM" bonds, a type of security that can be backed by even riskier mortgages, instead, because they offer higher yields.

Outside of CRT bonds, securities backed by streams of single-family rental home payments have also been coming with fewer protections for investors. Invitation Homes, a Blackstone Group-backed landlord, has recently been selling bonds that can’t be called back for two years, but have an extension option of up to five years, leaving investors to puzzle over whether the bond will pay off in two years, seven years or somewhere in between. Earlier iterations of the notes had only three years of extension options.

Not all market participants are worried about the changing composition of the deals. Michael Canter, who is head of securitized assets at AllianceBernstein, said CRT securities remain the best way to bet on the U.S. housing market. And Bank of America analysts led by Chris Flanagan said in a note that loosening credit standards will continue but will likely be "prudent rather than leading to excesses as seen in the last decade."

For any given security, if borrowers look a little weaker on one metric, it doesn’t always spell trouble for the bonds, said Tracy Chen, head of structured credit at Brandywine Global, which manages $76 billion. She said she recently purchased securities in an offering that were backed by a larger percentage of loans made to borrowers with high debt-to-income ratios because the notes offered extra protections for investors. But it could be a problem if metrics sink across the board.

"What concerns us is the risk layers," Chen said. "We’re closely monitoring the gradual changes."