Harley Davidson (HOG) is a very interesting name and a stock that I keep constantly on my watchlist. I have analyzed the issues the company is facing in my previous articles. Keeping it simple, we can summarize Harley Davidsons problems in a few main points:

The first problem is that, overall, sales of motorcycles in the developed world have softened after the great financial crisis, especially in the United States, a market that still accounts for almost 70% of the companys total revenue. Moreover, Harley Davidsons core business is selling motorcycles in the 601+cc segment, a segment that experience softness after 2008 (and has never recovered since then). Intense competition and unfavorable conditions in the second-hand market have pressured prices and margins, while international growth hasnt been enough to offset the weakness in the domestic market.

The combination of wrong positioning, weak industry, fierce competition and excess supply in the second-hand market have created an unfavorable environment for Harley Davidson, even though the brand remains strong in its segment.

In this context, Q1 results didnt make us more positive about the companys prospects, nor did they suggest a turnaround may be close. In the first quarter, revenue was up 2.4% despite decreased shipments compared to last year’s first quarter. Nonetheless, the positive performance was more a result of the easy comparisons with Q1 2017 (when revenue was down 14.2%) rather than a sign of improving fundamentals. On a two-year stacked basis, the performance has actually deteriorated further and implied another decline in the growth rate.

The management didnt hesitate to point out that, although worldwide retail sales of new Harley-Davidson motorcycles in Q1 were down 7.2% versus prior year, sequentially the year-over-year Q1 sales rate improved compared to the Q4 2017 sales rate (-9.6%), but they didnt mention the much easier comparisons with Q1 2017, which I have highlighted.

The weak conditions in the industry and the ongoing investments in marketing and product development continue to pressure profitability but a favorable product mix, favorable currency exchange, and higher pricing led to flattish non-GAAP gross margins despite the higher steel and aluminum costs. Anyway, operating margin as a percent of revenue was just 12.7%, 510bps lower than in the corresponding period of 2017 due to the higher investments in marketing and product development and a $46.8 million restructuring charge related to the manufacturing optimization. Harley Davidsons margins have been in a constant decline for years and show no signs of stabilization. The decline has actually accelerated over time: 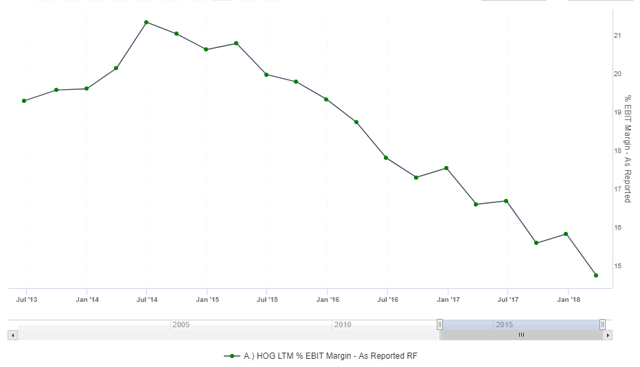 The underlying trends are clear. Q1s results didnt show anything new and confirmed the company is still facing strong headwinds despite the slight revenue growth. Shipments were down, margins contracted further and the domestic market (core market) continues to be the most troubled one.

There is a short-term opportunity to unlock some value in Harley Davidsons shares if the company is able to deliver a positive performance in terms of deliveries in H2, as the management is forecasting. The gap between market expectations and managements guidance may generate some relief in the next months.

On the other hand, the main fundamental issues remain, and even the management pointed out that the increase expected in the second half of year is more a function of what happened last year than a reflection of a turnaround.

In particular, I continue to see an abundance of factors that pressure Harley Davidsons margins, which can neutralize a bullish case based on the recovery of deliveries in H2.

The first factor is the cost of raw materials. In the middle of February, the U.S. government announced tariffs on steel (25% tariff) and aluminum (10% tariff), two important materials for Harley Davidson’s products. Since then, aluminum and steel prices were up anywhere from 5% to 15%. The management has admitted that they expect even higher unfavorability in the raw materials part of P&L, which translates into an additional $15 million to $20 million on top of their expectations at the start of the year.

The second factor is restructuring costs, which will amount to between $120 million and $140 million this year, and they will continue to pressure margins in the short term, although we can expect them to generate important savings in the long-term.

The third factor is the unfavorable change in product mix that international growth is bringing. In the United States, which accounts for almost 70% of total revenue, over 50% of sales are touring bikes, while in the international markets Sportster and street make up a bigger percentage of revenue. Unless something changes, and there is no reason to expect such changes at the moment, international growth will continue to have a dilutive effect on margins, while the domestic market seems to be unable to return to healthy growth.

We could see a short-term rally if Harley Davidson was able to grow deliveries in line with the managements guidance, but the long-term scenario is not more favorable than it was a few months ago. Several sources of margin pressure remain and are likely going to affect HOGs results for the foreseeable future. Per managements own admission, the positive growth in deliveries expected in H2 is more a result of easier comparisons than a consequence of improving conditions. I expect some relief for the stock price in the short-term but I dont see the fundamental conditions to bet on a turnaround at the moment. I confirm the margin of safety of an investment in HOG hasnt become favorable after Q1s results and the recent dip.

Thanks for taking the time to read the article. If you liked it, click on the follow button at the top of the page. You will get my articles as soon as they are published. I am available to further discuss the topics of this article in the comments section.