Greenhill & Co. (GHL) is breaking out higher on an improved operating environment. After years of weakness in international equities and a sluggish M&A environment, GHL’s operations are finally beginning to pick up. Its share price is similarly forming a bottoming pattern as investor sentiment increases. As fundamental improvement drives the company’s share price higher in coming quarters, I am buying shares to gain exposure to this trend.

The company, together with its subsidiaries, operates as an independent investment bank for corporations, partnerships, institutions, and governments worldwide. It provides financial advisory services primarily related to mergers and acquisitions, restructurings, financings, and capital raisings. GHL is also involved in the provision of advisory services to clients in relation to divestitures, spin-offs, and other strategic transactions, as well as various stages of these transactions ranging from initial structuring to final execution.

As far as its top-line growth, this was GHL’s best first quarter in terms of advisory revenue, primary driven by strong performance in its European M&A franchise, according to its earnings call. The strong performance reflects a dramatic improvement from the previous year and supports the company’s view that Europe’s continued economic strength is driving its strong advisory franchise in the region. Over the last year, there have been roughly 3x as many deals, $5 billion or greater announced in the market, according to management. Both U.S. and Europe have proven to be the strongest two markets, both areas in which GHL has presence.

Moreover, its capital advisory also had a strong quarter, driven entirely by a high level of activity in secondary transactions. Conditions are generally favorable for M&A activity globally as economic strength improves, particularly for larger transactions that have historically been GHL’s primary focus, according to management.

With respect to GHL’s compensation costs, absolute dollars of compensation expense increased on the quarter, according to its earnings call. Due to the company’s significantly increased level of revenue however, the compensation ratio declined to 56%, back within its historic range for the years prior to 2017. The compensation ratio represents a balance of generating attractive profit margins for its shareholders, while also rewarding its strong performers at all levels in a competitive manner.

Investor optimism is growing as the company recapitalizes its operations. Management’s principal objectives on the plan were to take advantage of what they viewed as an overly negative market sentiment, to increase tax efficiency, and reduce its cost of capital, while increasing employee alignment with shareholders, according to its earnings call. To do this, management repurchased significant shares at attractive prices. GHL also had increased tax efficiency by shifting away from large dividends toward large share repurchases and further benefited from a cut in U.S. corporate income tax rates, according to management.

Below is a chart of the company’s revenue, earnings per share, as well as its shares outstanding. Although both revenue and EPS have been sluggish in recent years, management decided to repurchase shares at a price they deemed undervalued. Management’s commitment to returning capital shareholders was rewarded as investors bid its share price higher following the announcement. Moreover, there are signs of strengthening fundamental operations as the global M&A environment picks up. Investor sentiment should remain elevated as the company continues to strengthen its operations. 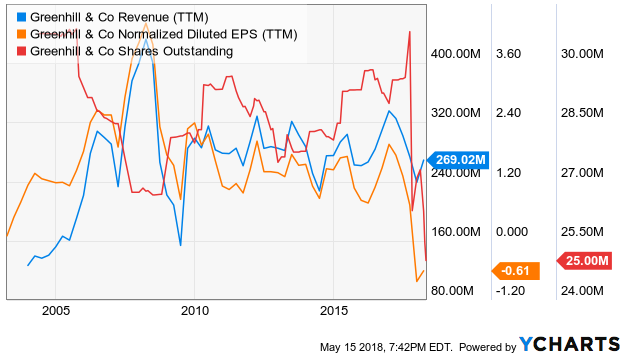 GHL has trended strongly lower since the financial crisis as international markets remained weak, while large M&A activity also lagged overseas. A recent recovery in both global business and equity markets increased the number and size of M&A transactions. This has directly benefited GHL, leading investors to bid its share price higher. Its share price looks to have formed a double bottom pattern, breaking its downtrend, and signalling that a reversal higher may gain traction in coming quarters. 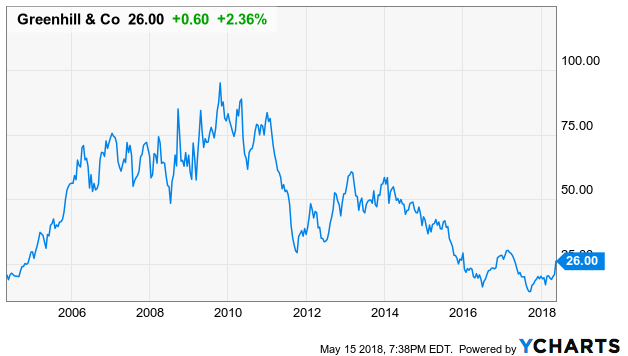 GHL is breaking out higher on an improved operating environment. After years of weakness in international equities and a sluggish M&A environment, GHL’s operations are finally beginning to pick up. Its share price is similarly forming a bottoming pattern as investor sentiment increases. As fundamental improvement drive the company’s share price higher in coming quarters, I am buying shares to gain exposure to this trend.

Markets move quickly. To take advantage of the highs and lows – especially in todays volatile environment – you need a strategy thats nimble and flexible. My approach is both, and it enables me to move in and out of assets and sectors while continually generating double-digit annualized returns. Sign up for Absolute Returns today to see how I manage my portfolio in the continuously changing market environment. Many believe absolute returns and beating the market are mere fiction, but I assure you theyre not. See for yourself how you can benefit from my approach, and how your portfolio can profit, regardless of market conditions.

Disclosure: I am/we are long GHL.