GoPro(NASDAQ:GPRO)announced better-than-expected first-quarter 2018 results on Thursday after the market closed, highlighting solid demand for both its high-end cameras and its new entry-level HERO model.

With shares of the action-camera specialist up more than 9% early Friday as of this writing, let’s zoom in to get a better idea of how GoPro started the year, and what investors should be watching. 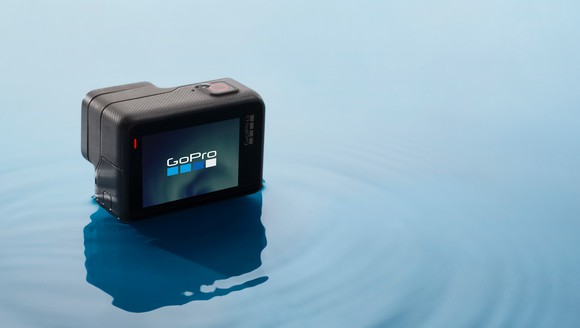 What happened with GoPro this quarter?
Revenue easily exceeded investors’ expectations for sales of $184.2 million. On an adjusted (non-GAAP) basis — which notably excludes stock-based compensation, acquisition costs, and restructuring expenses — GoPro’s net loss was $47.4 million, or $0.34 per share, narrowed from a loss of $0.44 per share in the same year-ago period. It also arrived ahead of investors’ expectations for a wider adjusted net loss of $0.38 per share. Adjusted gross margin was 24.3%, down 800 basis points from 32.3% in last year’s first quarter. GoPro’s adjustedEBITDAloss was $34.5 million, narrowed from a loss of $45.7 million in the same year-ago period. Camera units shipped increased 2.7% year over year to 758,000, helped by strong demand for GoPro’s high-end HERO6 Black and HERO5 Black cameras — which together accounted for over 60% of camera units shipped and dollar sales. GoPro launched its new $199 entry-level HERO camera on March 29, 2018, and plans to expand distribution to Target, Walmart, and other retailers in the second quarter. GoPro remained the No. 1 selling camera in North America for the 17th straight quarter. GoPro’s new Fusion 360-degree camera — which launched last quarter — captured 41% of the spherical camera market. The $4.99-per-month GoPro Plus subscription service reached 147,000 active paying subscribers, up 17% since the end of 2017. Average selling prices (ASP) fell 10% year over year to $267, driven primarily by lower Karma drone sales — recall GoPro is exiting the drone market after selling through its remaining inventory — and higher sales of entry-level HERO cameras.

GoPro’s founder and CEO Nick Woodman reiterated strong demand for the HERO5 Black and HERO6, noting that initial demand for the new entry-level HERO is “promising” and should improve once its retail availability expands.

“Our first-quarter performance makes it clear that there is significant demand for GoPro, at the right price,” Woodman said. “We began to step up marketing programs in March which, coupled with overall expense controls, solid channel management, and second half new product launches, gives us confidence for a successful 2018 for GoPro.”

During the subsequent conference call, GoPro told investors to expect second-quarter 2018 revenue of between $260 million and $280 million — down from $296.5 million in last year’s second quarter, but far above the roughly $240 million most analysts were modeling — with gross margin improving to the high-20% range.

In addition, GoPro anticipates revenue will return to growth on a year-over-year basis in the second half of 2018, though the third quarter will likely represent a lower proportion of second-half sales given the shift in timing of new product launches to the fourth quarter of this year. Finally, GoPro believes the introduction of those new, higher-margin products will lead gross margin to recover to the upper-30% range, aiding a return to adjusted profitability in the second half and a narrow loss for the full year.

If that happens, it will mark much faster progress toward GoPro’s return to sustained, profitable growth than most investors could have hoped. So with shares still reeling from GoPro’s painful holiday-quarter results revealed earlier this year, it’s no surprise to see the stock rebounding today.