For years, Asia’s biggest private banks have been on a hiring spree to keep pace with the ranks of newly minted millionaires. Now, they’re squeezing more out of their bankers.

Relationship managers who cater to wealthy clients in the region are running larger pools of money, with average assets run by each surging to an all-time high of $341 million last year in Asia, according to Asian Private Banker. Goldman Sachs Group Inc. topped the charts, with each private banker handling almost three times that amount.

The rising pools of wealth partly reflect the sheer volume of rich individuals being created in Asia, a region that’s home to more millionaires than North America. Yet, that opportunity is bumping up against the hard realities of running a private banking business, including spiraling compliance costs and a relatively shallow talent pool in local markets.

“All banks now start to realize that the affluence level has moved up, but the number of relationship managers is limited,” said Sean Kang, a director at wealth consultant Scorpio Partnership. The region is creating individuals with at least $1 million in investable assets at triple the rate of the increase in private bankers, data from Scorpio Partnership show. 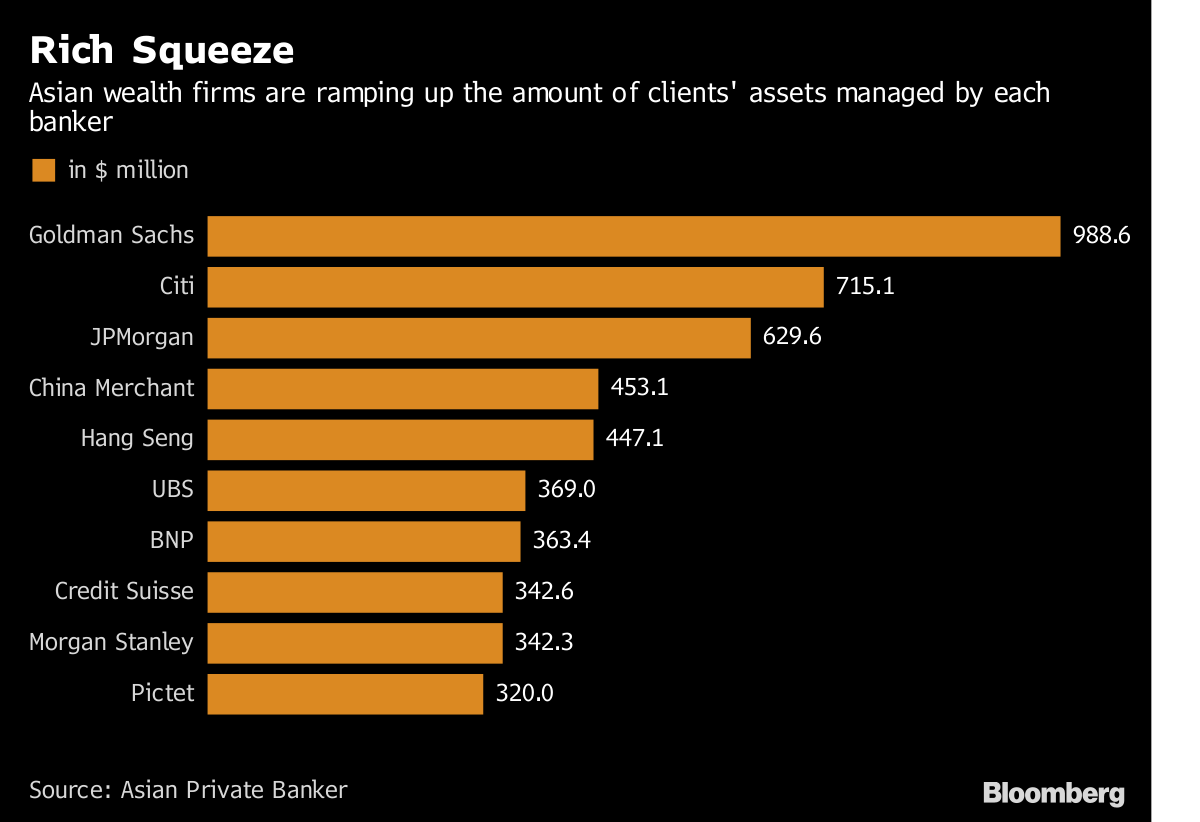 Private banks have added to their headcount in recent years to keep up with an expanding client base: from 2015 through the end of last year, the 20 largest wealth managers in Asia, excluding mainland China, boosted headcount by by 12 percent to 5,843, according to data from Asian Private Banker. Increasingly, some experts are questioning the wisdom of that approach.

“Profitability is a challenge that private banks are all struggling with in Asia,” said David Wilson, head of Asia wealth management at Capgemini Financial Services. Some of the region’s private banks are coming to realize that big hiring sprees don’t always help them meet targets for growing assets under management or income, he said.

In Switzerland, each relationship manager delivers 25 percent more revenue on average than those in Singapore and Hong Kong, according to Scorpio Partnership.

The number of Credit Suisse Group AG client-facing executives in Asia fell 8 percent last year, according to the Swiss bank’s annual report, reversing some of the rapid expansion in previous years. “We have continued to hire senior RMs strategically across the region, while managing performance at the same time,” said Edna Lam, a Credit Suisse spokeswoman in Singapore. “As a result, RM productivity continues to increase robustly,” she added.

Firms such as Standard Chartered Plc and Bank of Singapore, meanwhile, are raising the minimum amounts rich clients need to park with them.

Banks have also become more strict with clients in enforcing those minimums, set by some of the larger firms at $10 million, said Capgemini’s Wilson. “The threshold has always been $10 million, but it was a loose 10. Now it’s a hard 10,” he said.

At Goldman Sachs, assets handled by each relationship manager in the region rose on average by 29 percent to $988.6 million last year, even as the number of such employees declined 3.3 percent, to 88, according to the Asian Private Banker.

A Goldman Sachs representative declined to comment on the figures, though the bank said it seeks to maintain a good balance between clients and wealth managers. “Our client base is made up almost exclusively of ultra-high net worth individuals who demand highly personalized and customized solutions, and each of our private wealth advisors covers only a small number of clients,” said Ronald Lee, a Goldman Sachs partner who leads the bank’s Asia-Pacific private wealth management.

Each banker is handling more assets at wealth firms in Asia 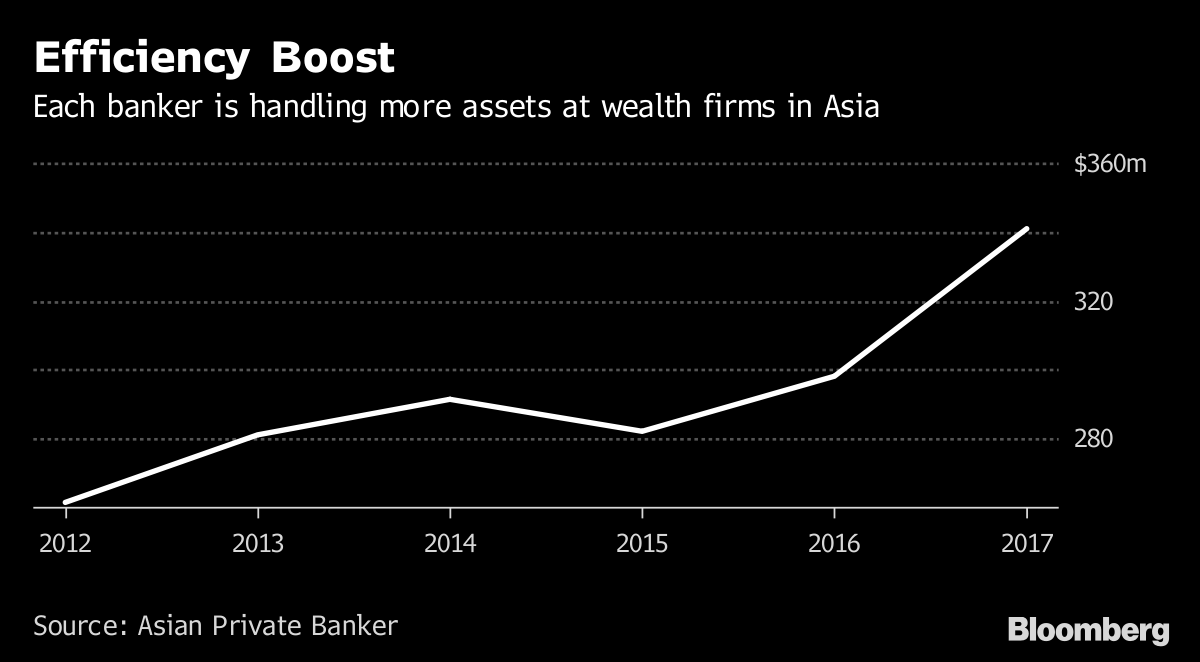 Bank of Singapore, which bought Barclays Plc’s wealth units in Singapore and Hong Kong in 2016, plans to raise its productivity by doubling the assets per relationship manager to $500 million, according to Chief Executive Officer Bahren Shaari, adding that the improvement will come through the use of technology such as artificial intelligence and robotics. The private bank of Oversea-Chinese Banking Corp. is also raising the minimum client threshold to $5 million from $2 million, Bahren said last year.

Focusing on a small number of extremely wealthy clients does have a downside, said Scorpio Partnership’s Kang. If a private banker leaves, and clients follow those managers to their new place of employment, that could significantly impact assets under management, he said.

Still, some private banks are figuring out strategies to reduce that risk, for instance by organizing managers into teams to serve a small number of clients. And for the most part, the added boost to productivity is well worth it for wealth managers, he said.

“Banks are already paying through the nose,” for talent and other costs such as compliance, said Kang. “Now they have to cut and become more efficient.”