Cancer-test maker Genomic Health (NASDAQ:GHDX) started the year on a high note, posting double-digit revenue growth, and would have turned a profit if not for an $8.5 millionone-time charge for stopping development of the Oncotype SEQ Liquid Select test, which was announced on the last quarterly call.

What happened with Genomic Health this quarter?
Revenue was hurt by the new ASC 606 accounting standard that requires the company to take bad debt expense into account on the revenue line. Comparing apples to apples, revenue would have been up 13% year over year. The number of Oncotype tests delivered only increased 3% year over year, highlighting the company’s ability to get higher reimbursement. Much of the revenue growth is coming from the U.S. invasive breast cancer business, which grew 12%. U.S. revenue from its prostate cancer business was 75% higher, but it’s a small base of just $5.8 million. Medicare issued draft guidance recommending coverage for its new Oncotype DX AR-V7 Nucleus Detect, a liquid biopsy test for metastatic prostate cancer, which should result in reimbursement from the agency later this year. The long-awaited results from the Tailorx breast cancer trial are scheduled to be presented at the American Society of Clinical Oncology (ASCO) meeting at the beginning of June. 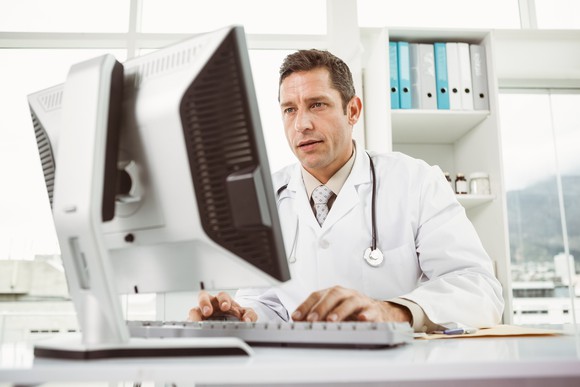 Kimberly Popovits, Genomic Health’s chairman, CEO, and president,is clearly excited about the Tailorx presentation at ASCO and the potential to accelerate the use of the company’s breast cancer test in the second half of the year. “Robust and large randomized clinical trials like Tailorx come along once in a decade at best,” Popovits said during the earnings call.

Popovits also highlighted how far the company has come over the last 18 years: “We have now delivered more than 900,000 test results to cancer patients in over 90 countries, generating more than $2.5 billion in revenue and over $5 billion in savings to the healthcare system, and we are only just getting started.”

It’s that two-for-one savings from its tests, which come from not wasting resources treating with unneeded medications, that should make continued reimbursement an easy sell to insurers and government healthcare plans.

Management reiterated its previous guidance for revenue to increase by 10% to 15% this year. Much of that will come from a boost in usage of its breast cancer test if the Tailorx results play out as the company expects them to, but growth of its prostate cancer test, a new higher reimbursement rate from Medicare, and the new DX AR-V7 test should also add to top-line growth throughout 2018.