This week brought us another earnings release from Freeport-McMoRan (FCX) and another conference call that focused almost entirely on Indonesia and the Grasberg Mine. Investors completely ignored, yet again, the incredibly strong earnings power of the company, the balance sheet that is growing healthier with each day, and the resumption of the dividend and the communication that investors should expect a dividend increase and/or special dividends going forward.

One single issue took the spotlight. The Indonesian Government is now demanding Freeport stop dumping tailings in the nearby Ajkwa River, something Freeport has been doing since it began mining Grasberg over two decades ago. Based on the reaction of the shares, one would think Freeport will have to shut down Grasberg. The market has shredded shares of the stock, sending it down almost 20% in a matter of days. Once again we now have the company trading so cheap that it’s almost fully discounting the existence of the Grasberg mine. How many times will Freeport-McMoRan sell off because of Indonesia? 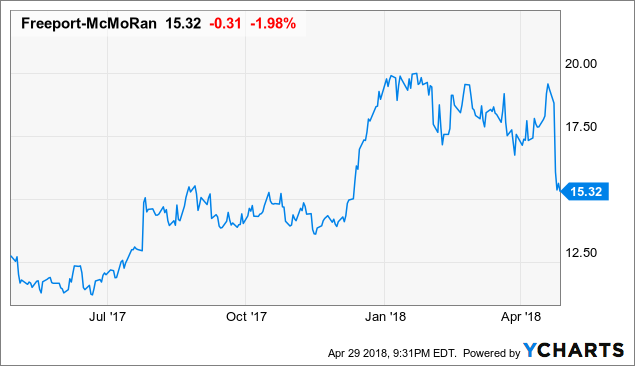 “It cannot be done”

The overall message on the conference call from Freeport management is that new environmental standards, were they to be put into place, are impossible to comply with.

The government is demanding that Freeport retain 95% of the mine waste that it produces. Currently, they are only required to retain 50%. The other 50% goes downriver and eventually out into the ocean. Remember, Grasberg is very mountainous, and it’s also massive. The mine produces about 10,000 tons of tailings per hour, and you simply cannot store that much waste in the mountains.

Logically, it would seem that Freeport has a strong case here. The Indonesian Government by no means wants to see the mine closed down over this issue, as 16,000 workers are employed at the mine. According to Freeport, the mine represents 95% of the GDP of the region. To further highlight how economically important the mine is to the region, in addition to the 16,000 workers at the mine, an estimated 13,000 more people live off of the tailings that come downriver. These 13,000 people spend their days panning for any flecks of gold that remain from the largest gold mine on earth. The Grasberg mine has been operating for more than two decades sending tailings down the river, and they have processed 2.5 billion tons of ore over the years. The waste from that ore has to go somewhere, and the Government, nor Freeport want a shutdown of the mine, so there will likely be a compromise.

Another reason to discount the concerns surrounding Grasberg, remember that Grasberg is one of the largest copper mines on earth. For a market that is already in deficit with deficits projected to grow significantly over time, one would expect that any possibility of Grasberg going offline would immediately tighten up the copper market and send prices higher. Instead, copper has been flat to down since the news came out. It would appear the copper market itself isn’t even slightly worried about Grasberg production going offline.

By sending the shares down 20%, the market has wiped almost $5 billion off the market value of Freeport-McMoRan. Today Freeport-McMoRan’s market cap is just $23.7 billion. While that may sound like a significant number, we have to put it into perspective. Freeport-McMoRan’s free cash flow is projected to be $3.6 billion this year. This means that the company today, with its $23.7 billion market cap, offers a greater than 15% free cash flow yield to shareholders. We can even look more specifically at Freeport and focus on just the Americas operating segment. This segment excludes the Grasberg mine completely. 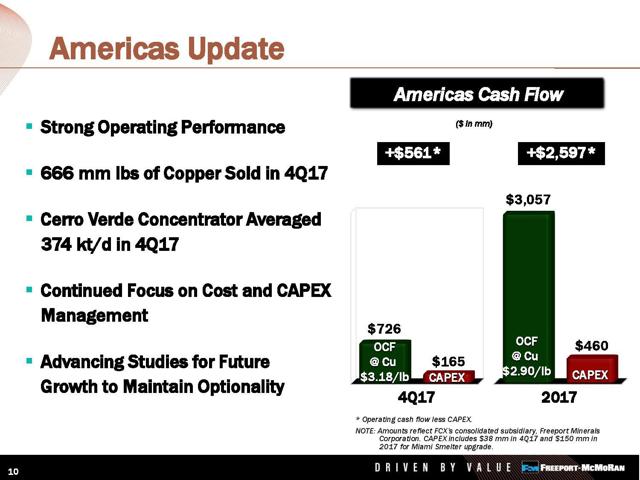 Last year, Freeport generated $2.6 billion of free cash flow in the American mines. That means that even if Grasberg didn’t exist, Freeport-McMoRan would still have an 11% free cash flow yield. The $2.6 billion of free cash flow coming from the American mines could support a $1.00 per share dividend and still leave Freeport over $1 billion annually for debt reduction, share repurchases, or capital projects. I say all this to say that Freeport-McMoRan is already priced as if Grasberg is worthless, yet the stock continues to suffer from emotional selloffs based on the news flow out of Grasberg.

It’s not that investors are oblivious to value, they are just losing patience with Indonesia

Nothing is more frustrating in the market than uncertainty, and the past few years have brought nothing but uncertainty surrounding Freeport-McMoRan’s Indonesian operations. As a value investor and a contrarian, I seek out uncertainty because it generally brings with it the best prices. This most recent news, however, has truly tested my patience with the situation. In the last few years, we’ve seen the Government demand higher taxes and royalties, as well as threaten to take away Freeport’s exporting capacity and mining permits. They’ve demanded that Freeport build multi-billion dollar smelters while simultaneously demanding that Freeport sell a majority stake in Grasberg.

When Freeport made an offer to sell just over 10% of the mine for $1.7 billion, Indonesia rejected and instead gave a counteroffer of just $600 million. All of these were frustrating in their time. But most of them accompanied rock-bottom share prices for Freeport, and that helped make it possible for shareholders to overlook them. This year Freeport finally hit the $20 per share mark, ushering in a new wave of optimism that things were finally moving towards a final resolution and a level of normality, only to get hit with these new environmental demands. The Freeport faithful, myself included, are truly seeing their patience tested.

It’s no surprise that capital is fleeing the country

With all the demands coming out of Jakarta, it would appear the Government is attempting to stir up enough chaos in Freeport’s stock price and shareholder base that they can negotiate themselves a more favorable acquisition price for the mine.

Ok, that makes sense on some levels. With all the uncertainty, Freeport-McMoRan investors are giving up, leaving significant value on the table in the meantime. But they aren’t the only ones walking away. As Bloomberg recently reported, 2017 saw the first year of capital fleeing Indonesia going back through 15 years of records, with $1.2 billion of foreign investment capital leaving the country.

One could argue that Indonesia is doing this to benefit more from its own natural resource base or to negotiate better prices for the mine. Either way, it may be a zero-sum game for them. The more they gain fighting Freeport and partner Rio Tinto (RIO), the more they appear to be losing on the other end.

The dividend was just reinstated, and management is already talking about increasing it

Ok, so let’s pause the discussion on the chaotic behavior of Indonesia and look at the positives of Freeport. The company is producing an incredible amount of cash and is on track to begin seriously flooding shareholders with cash in the coming years. The company just reinstated their dividend after having suspended it for over two years. With the volatility in the stock price, this component of shareholder value is completely being overlooked. Yes, the dividend that was just reinstated is only 20 cents annually, but those 20 cents are similar to dipping your toe in the water before you jump in.

The current dividend only consumes $300 million annually. Remember that Freeport is generating $3.6 billion of free cash flow annually. They could comfortably payout $2.40 per share if they wanted to, and anyone who has followed the company for a decade or more should remember that Freeport-McMoRan has a long history of flooding shareholders with cash when times are good. It would not be out of the realm of possibility for shareholders to actually receive a $2.40 annual dividend if Freeport had no other financial obligations to consider. In fact, in 2013 Freeport paid $2.25 per share in regular and special dividends to shareholders, and in 2006 they paid $2.37. Those levels of cash distributions are right around the corner if you can look through the Indonesia drama.

The one financial precursor to the implementation of large regular and special dividends is getting net debt back down to zero. After the near death experience shareholders went through in 2016, management has aggressively cleaned up its balance sheet, taking net debt from over $20 billion at year-end 2015, down to $7.9 billion today, and likely to less than $6 billion by the end of this year. 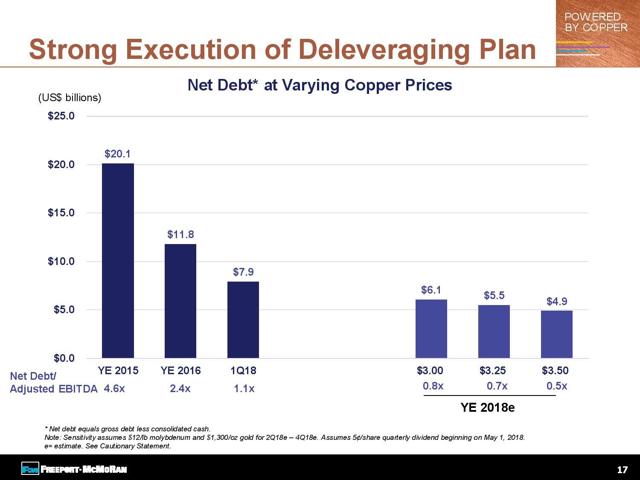 We already know that management is projecting $3.6 billion of free cash flow this year. Looking forward, they are guiding to about $3.3 billion in 2019. Remember, the current dividend only consumes $300 million of cash, so Freeport could double or even triple the dividend and still have billions left over for debt reduction.

Consider your exit price before you buy

If you are a new investor, buying in today at $15 per share, historical volatility hasn’t mattered to you. All you need to know is that this stock has been wildly volatile over its lifetime, and you should expect it to continue to be volatile. Copper mining will always be a cyclical industry, so the stock should not be considered as a “buy and hold forever” stock.

Currently, we are at the lower end of the lifetime range on the stock. Fundamentally, the stock should be trading much higher, and in time, as issues in Indonesia quiet down, I expect to see Freeport trading up near the mid-point of its lifetime range, or around $30 per share. At this point, a good strategy to employ would be to sell out of the money call options. This allows you to pick your exit price in advance, and get paid to do so. With the stock so volatile, after a nice rally like the one we saw this past December and January, you can collect very rich premiums with a covered call strategy. This strategy locks in a preset sale price, and it rewards you with cash whether or not Freeport goes up, down, or sideways. Recently I’ve implemented a strategy of selling laddered covered calls, which will liquidate portions of my position as the stock climbs. And while I’m certainly a believer that Freeport can ultimately reach its old highs of around $60/share, I expect to be long gone from my position by that point.

While there is no doubt Freeport-McMoRan is cheap, frustrated shareholders are continuing to trade the stock based on ongoing news out of Indonesia. Freeport’s 15%+ free cash flow yield and dramatically improved balance sheet, combined with the resumption of dividends should support the shares. Future increases in the dividend, as well as the eventual resolution of Indonesian issues, should push this stock up to the $30 range. Once the stock begins to rally up towards these levels, investors should consider trimming their positions, either through outright sales or through a covered call strategy.

Disclosure: I am/we are long FCX.