The boom in cryptocurrencies seems to have turned into a bust. A Bitcoin is now worth about $8,000, down more than 50% from its peak last December, and the public interest in cryptocurrency has also declined.

According to Google Trends, searches for bitcoin peaked in December and have fallen steadily as the get-rich-quick appeal of the digital currency has faded. Today, searches for bitcoin are less than one eighth what they were at their peak. Searches for the term “cryptocurrency” and specific coins like Ethereum and Ripple also peaked around the same time, and are now just a fraction of what they used to be. Now that the speculative interest in such currencies has passed, they are unlikely to reach their former peaks again.

Still, investors looking to make huge gains, as many had hoped to do from cryptocurrency, can find plenty of opportunity in stocks, some of which are even connected to cryptocurrencies. Here’s why our contributors recommend Square (NYSE:SQ), NVIDIA (NASDAQ:NVDA), and JD.com (NASDAQ:JD). 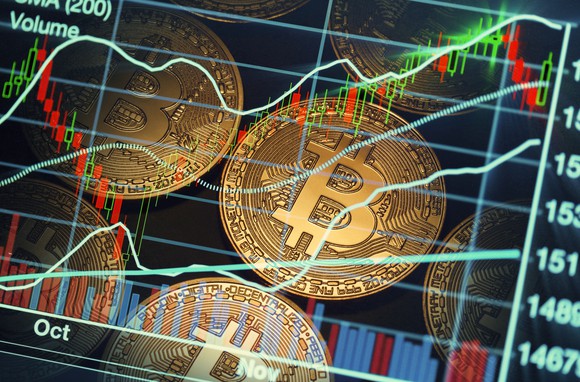 A side bet on bitcoin

Leo Sun (Square): I think buying cryptocurrencies directly is far too risky, but I’m willing to invest in companies that offer limited exposure to the crypto market. One of my investments is payments processor Square, which added bitcoin trading to its peer-to-peer payment app Square Cash earlier this year.

Square hasn’t made much money from the venture. It spent $33.9 million buying bitcoin last quarter and generated $34.1 million in bitcoin sales — which equals just $200,000 in revenue, or less than 0.07% of its total adjusted revenue for the quarter.

However, the rest of Square — which owns an expanding ecosystem of next-generation POS (point of sale) solutions, business services, food delivery options, a financing arm, and a web-design platform — is still rapidly growing.

Gross payment volume on Square’s platform grew 31% annually to $17.8 billion last quarter, as its total adjusted revenues jumped 51% to $307 million. Square expects its revenue to rise 44% (at the midpoint) for the full year. Square is unprofitable on a GAAP (generally accepted accounting principles) basis, but its non-GAAP profits are rising. The company expects its adjusted EBITDA (earnings before interest, taxes, depreciation, and amortization) to surge 76% at the midpoint, and for its adjusted EPS to climb 70%.

In a recent interview with The Times of London, CEO Jack Dorsey boldly claimed that bitcoin would become the world’s “single currency” within ten years. Therefore, Square’s bitcoin business isn’t significant today, but it might eventually become a pillar of growth for the growing company.

Winning with or without cryptocurrencies

In the same report, however, NVIDIA also warned investors that crypto-specific revenue in the second quarter will crash to around one-third of its first-quarter levels. But with multiple growth irons in the fire — from gaming to data centers, autonomous driving systems, professional visualization, supercomputing, and a slew of applications centering around the growth of deep learning and artificial intelligence — NVIDIA continues to expect revenue this year to increase a staggering 40% over 2017 (to roughly $3.1 billion), while GAAP earnings per share should soar by over 150% to $1.98.

In short, NVIDIA will be just fine with or without the help of cryptocurrency-related revenue. And I think investors will do well by investing accordingly.

Jeremy Bowman (JD.com): Cryptocurrency may hold potential for blockbuster returns to some investors. But one economy that is clearly exploding is China. Online retailer JD.com is in a position to benefit both from growth in the Chinese economy, as more Chinese join the middle class, and from the secular increase in e-commerce sales, as internet and mobile access expand and technology and delivery capabilities improve.

Though often thought of as playing second fiddle in the market to Alibaba, JD.com is actually the biggest direct online seller, as Alibaba only operates as a marketplace, like eBay. That makes more JD.com more like the Chinese equivalent of Amazon: It operates both as a direct seller and as a marketplace for third-party vendors; it also has a fast-growing network of warehouses in China. Like its American peer, JD.com is investing in technologies like drone delivery that, along with its network of warehouses, could give it an edge over Alibaba. JD has also been rapidly gaining market share on its larger rival, seeing its share of the business-to-consumer market grow from 17.7% to 32.9%.

Founder and CEO Richard Liu has his sights set on Europe and the U.S. and plans an expansion into Western markets as soon as this year, presenting even more long-term growth potential. In other words, JD.com may be the best opportunity for investors to get their hands on Amazon-like growth; the company has posted revenue growth of 25% or better in every quarter since it went public in 2013, and it recently turned profitable. With the stock near a 52-week low, this could be a great time to get your hands on JD.com shares.