Ordinarily, a report of zero revenue in a quarter would not be too well received by investors. That was exactly the top-line result for Cara Therapeutics (NASDAQ:CARA) when the company reported first-quarter results on May 9, and while the stock did take a minor hit on the announcement, the important news for this clinical-stage biotech had nothing to do with the numbers.

Cara Therapeutics is working on a single drug, called CR-845 or Korsuva, that works on kappa opioid receptors in the periphery of the body. The drug is designed to stop pain and severe itching, or pruritus, at the source, rather than in the central nervous system. In contrast to other opioid pain medications, the drug doesn’t cross the blood-brain barrier, avoiding addiction potential and side effects common with those medications.

Investors got excited about Korsuva’s potential in the massive market opportunity for novel, non-addictive pain medication last year and bid the stock up over $28. But the company had a setback in late June, after a phase 2 trial of an oral formulation of Korsuva for arthritis showedmixed results, and the stock plunged 40% in a single day. 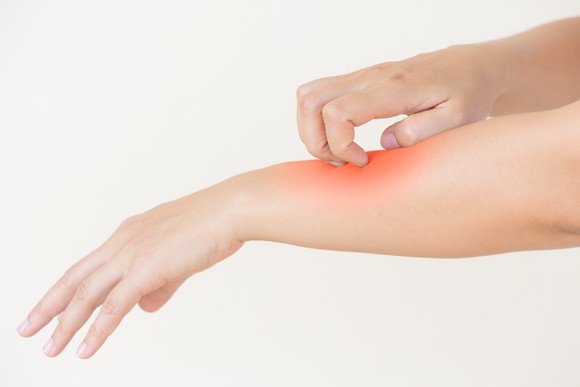 Cara had essentially swung for the fences by testing a pill for chronic pain, a condition responsible for 140 million prescriptions a year in the U.S. alone.That’s a crowded space, and the disappointing results for the arthritis study underscored the difficulty the company could have in getting it approved. Meanwhile, Cara has had more impressive data from trials for pruritus, which has led to a change in strategy for the company.

A pivot to pruritis

In the last two conference calls, Cara has made clear that it is shifting its resources to focus on pruritus over pain. It makes sense: There currently is no FDA-approved medication for the serious itching related to kidney disease, and no standard of care. Furthermore, the positive trial results have led the FDA to grant the drug a Breakthrough Therapy designation, which could result in a speedier approval.

Cara has started enrolling patients in a pivotal phase 3 trial for Korsuva injectionsin hemodialysis patients suffering from moderate-to-severe chronic kidney disease-associated pruritus. An earlier phase 2 trial read out last year with patients receiving Korsuva experienced a 68% greater reduction in worst itch scores than those receiving a placebo.If the new trial is successful, approval could come in 2019.

The current phase 3 trial targets a much smaller addressable market than pain, with a potential patient population of 200,000 to 300,000 in the U.S. But with no current competition, the commercial risk is also smaller, and the company plans to expand into other pruritus indications to grow the market. Non-dialysis patients with pruritus from kidney disease represent a potential U.S. patient population of 3 million, and Cara is starting trials of oral Korsuva for patients in earlier stages of kidney disease as well as for pruritus associated with chronic liver disease. Pruritus caused by atopic dermatitis and psoriasis are also under consideration as targets.

Big news is coming in the next six weeks

The company is not giving up on pain, by any means. In fact, a phase 3 trial of an intravenous (IV) formulation ofKorsuva for post-operative pain is expected to read out by the end of June. This is another large market, with over 60 million patients annually in the U.S. The results of this trial are likely to cause a big movement in the stock price one way or the other. A failure would make the chances for Korsuva in a pain indication anytime soon pretty remote, and investors would surely register severe disappointment. On the other hand, a success could once again put Cara Therapeutics in the spotlight.

In this month’s conference call, an analyst asked CEO Derek Chalmers what the company would do if the pain trial was a success, given the company’s shift to pruritus. He confirmed that Cara was in “active discussions” with potential partners for advancing the drug in pain, and that may be the path for the post-operative pain indication.

Whereas a partner means sharing the profit with another company, it also would mean Cara would have help with the expense of commercializing the drug, and a flow of milestone payments and royalties the company could use to invest in pruritus indications.

From a short-term perspective, a successful result for the post-operative pain trial and a partner to bring the drug to market would be sweet developments for investors in Cara Therapeutics. But even if that doesn’t pan out, the company’s pipeline program is heading in the right direction with the focus on pruritus.

It may take a year or more for that story to play out, which could mean another capital raise if there isn’t a partner in the picture. But what has always been a risky, one-trick-pony kind of company is getting a little more attractive to patient, risk-tolerant investors, thanks to the company’s new strategy of hitting singles instead of swinging for home runs.