David Einhorn, the one-time hedge-fund wunderkind, likes to remind his headstrong young analysts that he has been around a lot longer than they have.

During the dot-com craziness of the late 1990s, Einhorn tells them, newfangled measures like “eyeballs” and "stickiness” never did add up to profits. In 2008, when many hoped trouble would pass, he brazenly predicted Lehman Brothers would collapse.

He was right, of course. But Einhorn, who achieved widespread fame at moments of maximum danger, is no longer the enfant terrible he once was. For starters, he’s turning 50 this year. And, in middle age, he has clung to his old ways even as many in his industry have moved on.

The numbers tell the story. So far this year, his Greenlight Capital has handed its investors a 15 percent loss, bringing the total decline since the end of 2014 to a staggering 25 percent — one of the worst showings among his peers. Investors have bolted, pulling almost $3 billion out of the firm in the last two years.

Yet the baby-faced billionaire is unperturbed, no matter that he has been wrong about nearly every one of the top 40 positions in his $5.5 billion portfolio this year. He’s as cocksure as ever — some might say cocky — publicly and in conversations with colleagues. “We believe our investment theses remain intact,” he wrote in an April investor letter. “Despite recent results, our portfolio should perform well over time.” 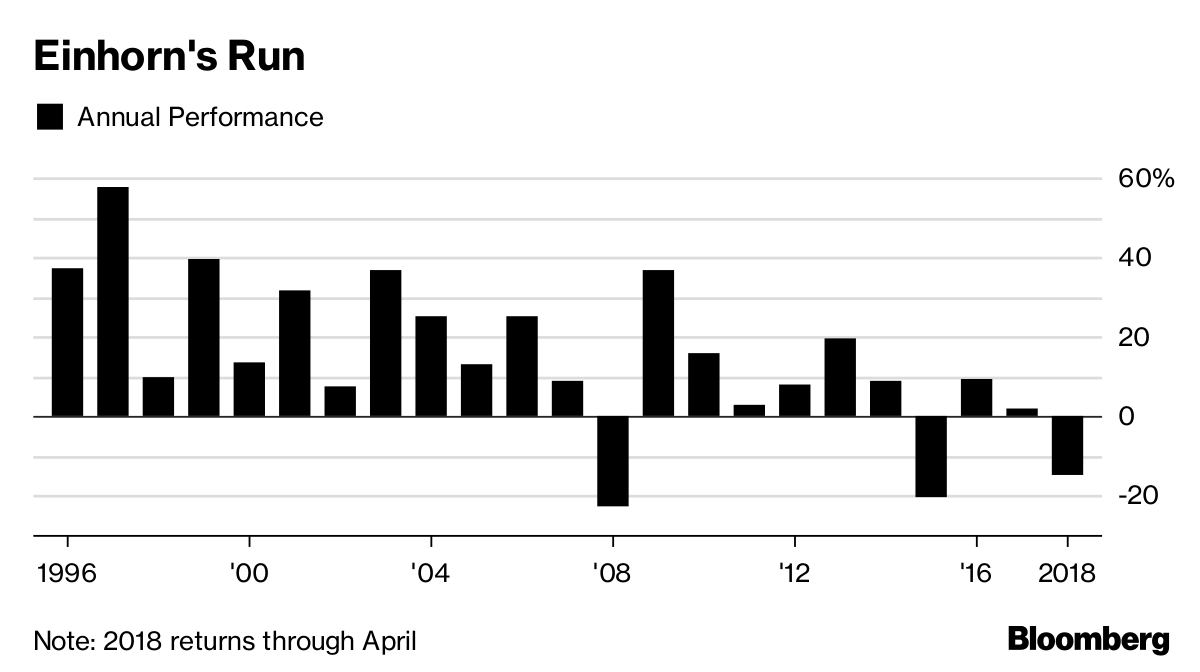 Einhorn’s this-too-shall-pass attitude puts him in an interesting spot in a $3.2 trillion industry invented back in the day on strategies that don’t work so well now — after a decade of historically low interest rates and the rise of passive investing and quant trading. The Einhorn modus operandi of buying the beaten-down stocks of companies he expects to grow and selling those that are overvalued has fallen out of favor.

Not surprisingly, many in Einhorn’s circuit have switched up approaches, at least on the margins. Lee Ainslie and Steve Cohen have added machine learning or other quant models to help in stock picking. Dan Loeb owns Facebook Inc. and Netflix Inc., even though in his early days as a value investor he would have never bought shares with such high prices relative to earnings.

On the short side, some no longer bet against bubbles. They’re careful about identifying catalysts that might move a stock or have stopped shorting individual stocks all together, using options on indexes instead.

And they’ve all performed better than Einhorn in the past few years.

“He’s chosen to stick with his approach in a massively shifting landscape, and I can’t help but admire his conviction,” said Brad Balter, who runs Balter Capital Management and is a long-time hedge fund investor. “But how do you survive when investors and the market are telling you they want you to change? It needs to turn into his kind of market fast.”

Einhorn, who declined to be interviewed for this article, started Greenlight in 1996 when he was 27, with $900,000 he assembled from family and friends. For much of his career he could do no wrong. In 2002, he challenged the accounting practices of lender Allied Capital, a prophecy that eventually paid off, just as his Lehman prediction did. Every year, he was arguably the biggest draw at the Sohn Investment Conference. Value-investor groupies still consider his annual client dinner, held under the giant blue whale at the Museum of Natural History, as second only to Warren Buffett’s confab.

As the decades passed, his wealth mushroomed. He commuted by train from Rye, New York, and drove around there in a Honda Odyssey minivan, but he did have those billionaire ways. He contemplated buying a stake in the New York Mets and trained with a professional coach for the 2012 World Series of Poker, where he came in third in a tournament. (He still lives in Westchester, where he’s going through a divorce after 25 years of marriage.)

These days, stubbornly a value investor, Einhorn is long a very cheap General Motors Co. and short a "bubble basket" including Netflix and Amazon.com Inc. While this sort of approach has worked well historically, there are market cycles that can mess things up. The last bull market was a value cycle; this one is a growth cycle.

Einhorn’s view would be that we’re due for value to assume the leadership mantle again soon. And many of his long-term investors agree there is reason to hang tough. Just consider: If you put $100,000 into Greenlight in 1996, you would today have $1.9 million. People who are sticking with the fund use basically the same language to defend their loyalty, something like: “David Einhorn is a smart guy — he didn’t go dumb overnight.”

For those who have lost faith, explanations vary. Some, for example, said they were put off because Einhorn allowed the firm to get too big — $12 billion at its peak — forcing it out of less-trafficked, smaller and mid-cap stocks where he originally made money and into larger cap names like General Motors and Bayer AG where it’s harder to have an edge.

He has irked others by being dismissive of their questions in the same way that he pushes back when his young analysts suggest the boss’s metrics for choosing stocks are wrong or outmoded, according to people familiar with these discussions.

Einhorn himself tells a story that captures what critics might call his hubris. He told colleagues about a recent dinner with other billionaire hedge-fund managers where they shared their stock ideas. While he didn’t go so far as to short their picks, he said their wagers made him like his own bets even more, according to people who heard him describe the evening.

In a letter to investors late last year, Einhorn seemed to be taking the question of whether the market had really changed seriously. “Perhaps there really is a new paradigm for valuing equities and the joke is on us. Time will tell.”

What he really meant, he later elaborated, was that time will show he’s right.

— With assistance by Simone Foxman