Extreme Networks (NASDAQ:EXTR) insider Edward Meyercord acquired 20,000 shares of the stock in a transaction dated Monday, May 14th. The shares were bought at an average cost of $8.42 per share, with a total value of $168,400.00. The transaction was disclosed in a filing with the SEC, which is available through this hyperlink.

Extreme Networks (NASDAQ:EXTR) last posted its earnings results on Tuesday, May 8th. The technology company reported $0.16 earnings per share (EPS) for the quarter, missing analysts’ consensus estimates of $0.21 by ($0.05). The company had revenue of $262.00 million for the quarter, compared to analyst estimates of $268.32 million. Extreme Networks had a positive return on equity of 43.61% and a negative net margin of 3.28%. The business’s quarterly revenue was up 75.6% compared to the same quarter last year. During the same quarter in the prior year, the business posted $0.10 EPS. equities research analysts expect that Extreme Networks will post 0.42 earnings per share for the current year. 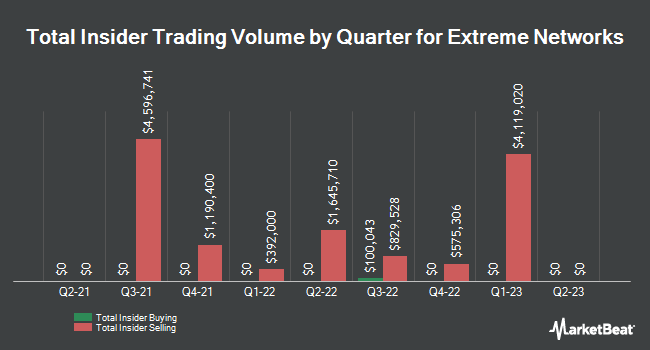