For a few months now, Gundlach has been making a bullish case for commodities in general.

In fact, bullish may actually be understating what he sees in store for commodities in the near future

Gundlach doesnt just think commodities are going to outperform. He thinks commodity prices are on the verge of EXPLODING higher calling for commodities as a group to rise 100 200 or even 400 percent!

That is obviously a very bold call.

But his reasoning is simple:

— The Trump tax cut which will boost economic growth

— A continued weakening of the U.S. dollar

In addition to putting together the current fundamental case behind rising commodity prices, Gundlach points to strong historical precedent for commodities surging now

As of today, commodity prices are the cheapest theyve been relative to the S&P 500 since the Dot.com bubble, as measured by the S&P GSCI Commodity Index.

And before that, commodities were not this cheap since the early 1970s.

(Keep in mind, after each of these prior instances, commodity prices staged furious rallies to outperform the S&P 500 by more than 800%.)

History doesnt necessarily have to repeat, but when you couple these historical facts with the fundamental bullet points above, its hard not to think commodities are poised to do well

Why Oil Stocks Specifically?
Like I said, at the Ira Sohn conference this week, Gundlach narrowed down his commodity call to the oil sector specifically. And its all because of this chart: 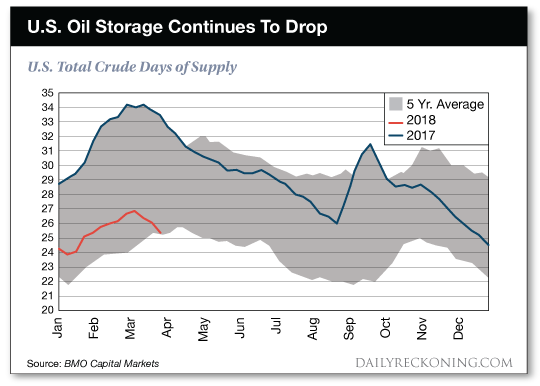 It details the number of days of oil demand that the U.S. has in storage relative to the five year average. In other words, this tells us how long it will take for us to consume all of the oil we currently have in storage.

The red line represents 2018. You will notice that we are now right at the very bottom of the five year average in terms of days of oil demand in storage a place we havent been in a very long time.

Clearly, there is a reason that the price of oil has gone up by more than 50% from last June, folks. The oil market has tightened substantially and it has done so very quickly.

For those of you looking to play Gundlachs continued oil rally, he went on to speak about how he favors buying the SPDR S&P Oil & Gas Exploration & Production ETF (XOP), because of how its bizarrely underperformed the rally so far.

After all, the XOP is an equal weighted fund, meaning it has as much exposure to smaller (and more leveraged) oil companies and therefore should have instead outperformed.

At some point the market is going to accept that the oil glut is gone, and reward the companies that are included in the XOP with better valuations.

This article originally appeared on The Daily Reckoning.