The builder agreed last year to borrow from GSO, and as part of that d 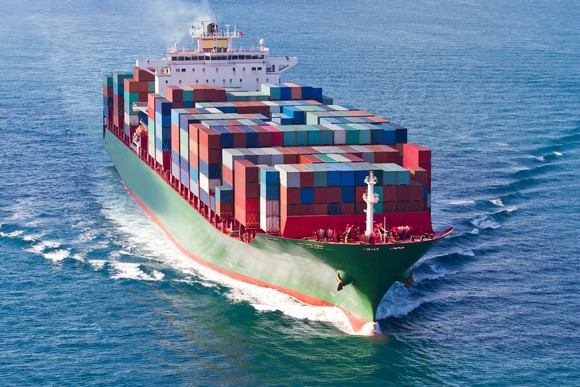 Although Textainer Group Holdings Limited (NYSE:TGH) and Teekay Corporation (NYSE:TK) are both focused on the shipping industry, they go about it in vastly different ways. Both companies were hit hard by industry downturns, but Textainer started to see a notable improvement in its container busi

Although Textainer Group Holdings Limited (NYSE:TGH) and Teekay Corporation (NYSE:TK) are both focused on the shipping industry, they go about it in vastly different ways. Both companies were hit hard by industry downturns, but Textainer started to see a notable improvement in its container business in 2017. Teekay’s collection of ship-owning businesses in the energy sector, on the other hand, continued to struggle overall — but signs seem to point to an upturn this year. Which one is the better buy today?

Moving the boxes that carry our stuff

Textainer does one thing and one thing only: It owns shipping containers. The basic business model is to use leverage to buy those shipping containers and then lease them out under long-term contracts. That works well so long as the rates being paid by lessees are strong or rising, since Textainer will be locking in good prices for the normal five- to seven-year term of a lease. However, if rates are low or falling, it is locking in weak prices that can drag on performance for years.

A glut of containers and weak demand was a problem a few years back, with low lease rates leading to Textainer’s revenue falling each year between 2014 and 2017. The company’s earnings fell deep into the red in 2016 and it ended up eliminating its once-generous dividend. But 2017 was a turning point for the company, with lease rates starting to strengthen and earnings getting back into the black.

Textainer’s lease income increased each quarter in 2017, rising roughly 8% between the first and fourth quarters. The utilization of its containers, meanwhile, grew from 94.7% of the portfolio in 2016 to 96.4% last year. And that strength carried over into the first quarter, which is traditionally a weak period of the year. Net income rose 3.3% over the fourth quarter and utilization increased 40 basis points.

CEO Philip Brewer expects industry conditions to remain relatively strong, suggesting that 2018 will be another good year. And with leasing rates holding up well, Textainer is locking in good rates on the life of every new lease it signs. That helps explain why the stock is up 40% over the past year (however,it has fallen by roughly a third since hitting a peak in January 2018). Back on solid footing with first-quarter results that show the company’s solid progress, Textainer is an alluring option today.

Moving a lot of energy

Teekay, meanwhile, owns and leases out ships to the energy industry. Its structure is far more complex, with a collection of companies that focus on specific niches all contributing to results. Teekay Tankers Ltd. and Teekay LNG Partners LPare consolidated into Teekay’s results. These entities own tanker ships and liquefied natural gas ships, respectively. Teekay Offshore Partners LP, which owns a fleet of ships that service the offshore drilling industry, contributes to results via an ownership stake but is not consolidated. At all of these entities, debt is used to buy the ships that get leased out to customers. 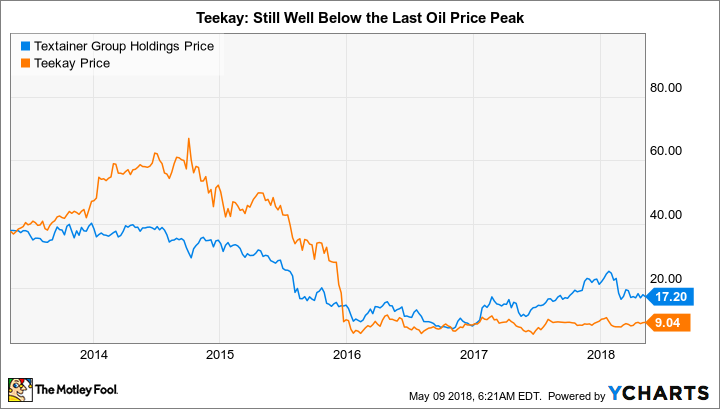 The oil downturn that started in mid-2014 took a heavy toll on Teekay’s results, with revenue peaking in 2015 at $2.45 billion and falling to $1.88 billion by 2017. Teekay suffered a 19% sales decline just from 2016 to 2017, and earnings were in the red during both years. A steep drop in demand as drillers pulled back because of low oil prices was the big issue.

That said, Teekay’s various parts started to benefit from some positive momentum in 2017. CEO Kenneth Hvid was particularly upbeat at the end of the year, suggesting that 2018 will be an “inflection point” as the company shifts back toward growth. That’s backed up by the fact that Teekay’s group of companies took delivery of 12 new ships in 2017 that have been leased out to customers (these should add roughly $450 million in annual operating cash flow), with more new ships expected in 2018. This should help lift Teekay’s top and bottom lines as it progresses through the year. Moreover, Hvid believes the energy markets Teekay serves will continue to rebound, providing solid demand for its ships.

The stock, however, remains 75% lower than it was in mid-2014 when oil prices peaked. That suggests that, so long as oil prices don’t collapse again, there is upside potential at Teekay.

Which is the better option?

Textainer and Teekay touch on two very different industries, so take that fact into consideration before making a selection here. Moreover, Teekay is a very complex business with four entities all playing a role, which is enough to keep me from buying it. That said, both companies appear to be turning a financial corner, with Textainer further along in its business recovery. That suggests both will see solid results in 2018 and likely beyond based on the leases they sign. 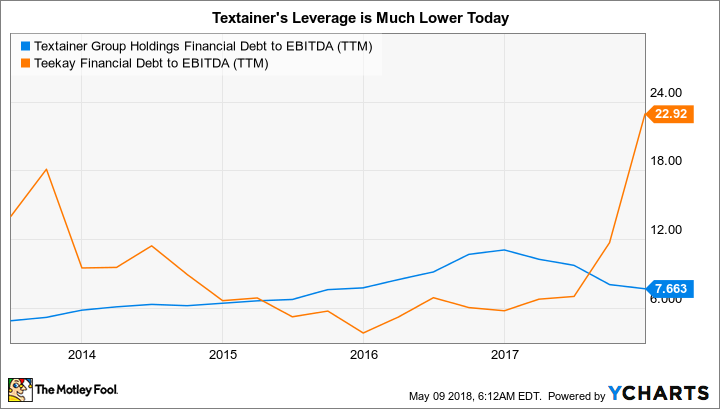 What makes me prefer Textainer, however, is the fact that the company’s debt-to-EBITDA ratio has been falling, while new ships and weak results have sharply driven up Teekay’s leverage. The company’s debt-to-EBITDA ratio should decline as new ships add to results, but the spike in this metric is higher than it was when oil prices were peaking in 2014. That worries me, since oil prices could just as easily fall as rise from current levels. I would err on the side of caution here and pick Textainer because it’s further along in its recovery, and that fact is starting to show up in its results and strengthening financial profile.