This has been a bad year for Biogen (NASDAQ:BIIB) so far — the biotech’s stock has dropped more than 10% since it began. But 2018 has been horrible for Acadia Pharmaceuticals (NASDAQ:ACAD), which has seen its share price plunge nearly 40%.

What goes down can go up again, though. Which of these two neuroscience-focused biotech stocks is more likely to enjoy a nice rebound? Here’s how Acadia and Biogen compare. 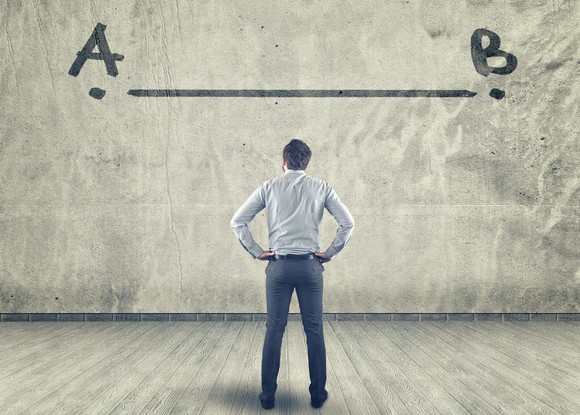 The case for Acadia

The reason to consider buying Acadia stock can be summed up in one word: Nuplazid. It’s the biotech’s only approved drug — and its only pipeline candidate.

Acadia reported net sales of $48.9 million for Nuplazid in the first quarter of 2018 — a 220% year-over-year jump. However, the drug won FDA approval for treating Parkinson’s disease (PD) psychosis in April 2016, so Q1 of last year was still very early for Nuplazid.

Actually, the drug is still in its early stages. Acadia CEO Stephen Davis stated earlier this year that significant patient education will be needed in order for Nuplazid to reach its potential. More than half of PD patients experience PD psychosis, but many of them aren’t aware that they do. Others don’t tell their healthcare providers that they’re experiencing PD psychosis symptoms. Acadia has been working on multiple fronts to teach patients about PD psychosis and the benefits of Nuplazid.

There’s more potential for the drug in treating other neurological conditions. Acadia is evaluating Nuplazid in phase 3 clinical studies for treating dementia-related psychosis and as a schizophrenia inadequate-response adjunctive therapy. There are also phase 2 studies underway examining it as anadjunctive therapy for both schizophrenia negative symptoms and major depressive disorder.

Just how big of a success could Nuplazid be? Some think the drug could reach sales of $1 billion over the next few years in the PD psychosis indication alone. There’s a long way to go, though: Acadia projects net sales between $255 million and $270 million in 2018. Given that its market cap stands close to $2.3 billion, Acadia stock could have a huge ramp ahead of it if the drug gets anywhere close to that sales target.

The case for Biogen

By contrast, the investment thesis for Biogen can’t be rolled into one word. The company has been a leader in treating multiple sclerosis (MS) for years, with three blockbuster franchises — Tecfidera, Tysabri, and its interferon products.

More recently, though, it has expanded into a promising new indication. Biogen and partner Ionis Pharmaceuticals won FDA approval for Spinraza as a treatment for spinal muscular atrophy (SMA) in December 2016. The drug has already been a big winner, racking up sales of nearly $884 million last year, and appears to be on track to generate sales of $1.5 billion or more in 2018.

Biogen’s pipeline could really change the dynamics for the company. While Biogen only has three phase 3 candidates, one of them holds the potential to become one of the most successful drugs ever. Market research firm EvaluatePharma ranks experimental Alzheimer’s disease drug aducanumab as the most valuable pipeline asset in the biopharmaceutical industry.

The biotech also has several promising phase 2 pipeline candidates. Perhaps the most intriguing of those is MS drugopicinumab, which uses the antibody anti-LINGO-1 to (hopefully) reverse and prevent damage to the protective myelin sheath that covers nerve fibers.

Thanks to the strong cash flow generated by its current MS products and Spinraza, Biogen had over $5.9 billion in cash, cash equivalents, and marketable securities at the end of the first quarter. This puts the company in a good position to augment its pipeline and fuel its growth.

To be clear, it’s not all sunshine and roses for either of these companies. Biogen’s MS franchises are under pressure from competing treatments. There is also a high level of risk the aducanumab won’t pan out — Alzheimer’s has proven a particularly tough disease for big pharma to make headway on. But Acadia faces the more concerning issue.

A few weeks ago, reports surfaced that the FDA is reexamining the safety profile of Nuplazid after several patients taking the drug died and others experienced adverse events. It’s possible that this reevaluation won’t lead to anything dire for Acadia, but investors can’t ignore the risks associated with this development.

I think Biogen is by far the safer pick, especially in light of the FDA investigation. However, I wouldn’t go so far as to call its stock a buy. The biotech’s fate hinges too heavily on aducanumab to give me a warm and fuzzy feeling. It could well be a huge winner over the next few years, but my view is that it’s best to stay on the sidelines with Biogen stock for now.