There’s going to be no stopping Axon Enterprise (NASDAQ:AAXN) now that it has acquired its main body camera rival VIEVU. The maker of Taser stun guns, body cameras, and evidence management software was already the leading camera supplier to police departments around the country, but with the purchase of its closest competitor, Axon will now be an unstoppable, dominating force.

Got an eye on you

Body cameras and evidence management are the future for Axon Enterprise. Because its Taser conducted electrical weapons are already widely deployed throughout police departments globally, there are limits to how fast that division can grow. 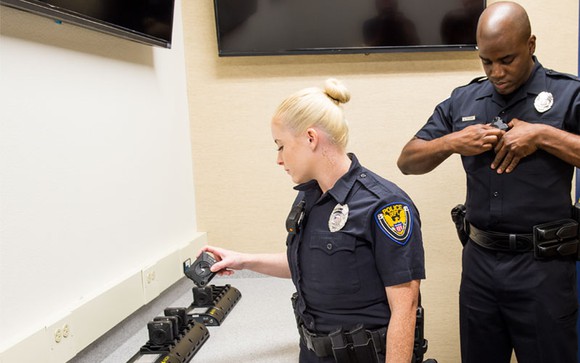 Over a decade ago Axon began developing its body camera and evidence management database, which occurred just as demand was growing for accountability from law enforcement agencies. It began testing what it called a pre-event video capture system that it dubbed Autonomous eXtended on-Officer Network, or AXON. It called its evidence storage and management platform Evidence.com.

Today the two seamlessly woven together components are the leading suppliers to law enforcement. Axon notes its body cameras have been adopted by 37 of the 69 major cities in the U.S., and there has been as much as an 88% drop in complaints made after officers began wearing them. The combination has become Axon’s fastest-growing segment.

Last year, net sales of software and sensors grew 66% to $109.3 million compared to a 16% increase in Taser sales, which hit over $234 million. Importantly, the five-year evidence contracts Axon signs with departments give it recurring streams of revenue.

Although it still currently derives most of its revenue from stun guns, the time is coming when body cameras and evidence management will assume the leading role. Now that it has acquired VIEVU, investors can expect that to begin right away.

The two companies have been engaged in a rancorous battle for police contracts, most notably for providing body cameras to the New York City Police Department, which VIEVU won. Although Axon criticized the contract as being improperly awarded and offered to give the NYPD 1,000 free cameras if they took its deal instead, the department stayed with VIEVU, though now Axon ends up with it anyway.

After the acquisition of VIEVU is completed, Axon will own 80% of all big-city police department contracts, and will be in a much stronger position to gaining the 15 that still remain.

A battle for technological superiority

The body camera market is still a contentious one, however, and Axon has sued and been sued by rival Digital Ally, which has accused Axon of stealing its patented technology. It claims Axon is so desperate to obtain its technology that it went out and bought the company Digital Ally had a supply agreement with to get it.

CEO Stanton E. Ross said that while the supply agreement with VIEVU will remain in place, “Ironically, any money VieVu (Axon) pays under that agreement will assist us in funding our litigation against Axon.”

While terms of the acquisition weren’t released at the time, when Axon reported its first-quarter earnings it revealed it paid $4.6 million in cash and $2.5 million in stock to VIEVU parent company Safariland, along with an additional 141,000 shares if VIEVU hits certain milestones over the next two years. Axon also agreed to make former owner Safariland a supplier of holsters for its Tasers.