Last year’s tax reform went through on a largely party-line vote, with only narrow margins of victory allowing the tax cuts to become law. Even after suffering defeat, opponents of the measure think it’s not too late to try to roll back some of the provisions of the reform law. In particular, Senate Democrats pinpointed five elements of the Tax Cuts and Jobs Act on which they’d like either to see old law restored in full or at least to find a middle ground between current and previous law.

With Republicans in control of Congress and the White House, the Democratic tax proposal has no chance of passing without concessions in other areas. Yet with proponents of the proposallooking to spend any revenue from rolling back tax cuts on infrastructure initiatives — something that lawmakers on both sides of the aisle desperately want — it’s at least possible that Republicans and Democrats could agree to make one or more of the five targeted tax cuts disappear. 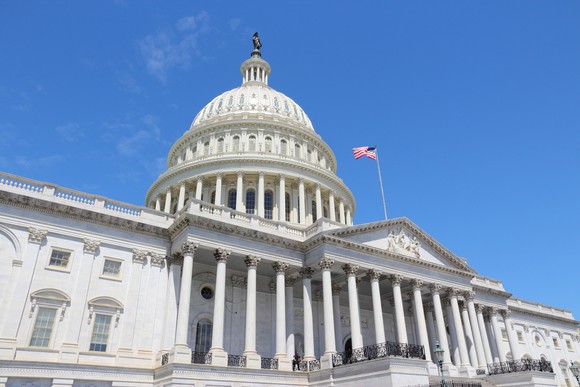 What tax-reform opponents want to get rid of

Opponents to tax reform identified the following provisions that they wanted either to return to previous law or to find a middle ground between the old law and the new tax changes:

Return the new top tax bracket of 37% back to 39.6%, where it was before tax reform became law. Raise the corporate tax rate from 21% to 25%, still leaving a 10-percentage-point reduction compared to the pre-reform 35% level. Return the estate tax lifetime exclusion amount to $5.59 million, down from its current $11.18 million. Reset exemptions and phaseout provisions for the alternative minimum tax back to the levels they would have been under old law.

In addition, those seeking further changes to tax laws suggested fully removing any beneficial treatment of carried interest among private equity and hedge fund investors. This measure wasn’t part of tax reform, but the reform effort failed to address the issue in the way that some proponents of the measure had suggested early on.

Which tax cut is most vulnerable?

If proponents of tax reform were to seriously reconsider any of these cuts in order to generate revenue to fund an infrastructure bill or other spending, the one most likely to gain traction would be eliminating the favorable changes to the alternative minimum tax. It’s the largest of the suggested rollbacks, potentially generating $429 billion over the next 10 years according to those calling for the elimination of the cut. It’s also the most difficult for typical taxpayers to understand, making it easier to dismiss as being too complicated to analyze and glean the true impact. Only those who actually pay the AMT really understand its impact, and even many of them would struggle to explain how it is that they’ve ended up being the tax’s target.

Perhaps most importantly, the AMT also has a reputation for being predominantly aimed at the ultra-rich, despite the fact that recently, the impact of the tax has actually shifted to the upper-middle class and those in the second- and third-highest tax brackets. Even under reform, the highest-income taxpayers have high enough ordinary income tax rates to avoid the AMT in most circumstances. The fact that reversing AMT relief would disproportionately hurt many taxpayers in states where legislators are proposing it be scrapped could also be a strong enough political motivation to let the measure through.

What about other taxes?

The estate tax has similar political value as a bargaining chip, but with just $83 billion in potential revenue, it’s not worth quite as much. Moreover, despite its high wealth threshold, even those who have little or no chance of ever paying the tax still see it as an unfair levy on money that’s already gotten taxed once when it was initially earned as income. At $12 billion, carried interest is too small to be particularly important in the debate.

For tax reform proponents to back down on the big rate changes the law made would be a massive concession. Boosting the top rate back to 39.6% wouldn’t generate all that much revenue, at just $139 billion. By contrast, a corporate tax increase from 21% to 25% would boost taxes by $359 billion. But even though some see the corporate tax cut as kowtowing to lobbyists, others argue that direct positive impacts on workers through bonuses and salary increases stemmed from the full cut, making it worth defending.

The art of the deal?

Were it not for the White House, there’d be just about no chance of any change to tax reform happening. The wild card is that President Trump has shown at least some predisposition to working around his own party to explore other ways to get what he wants. If those seeking tax-cut rollbacks manage to package them in something the White House would really like, it could put pressure on Congress to take them seriously.