When Arconic (NYSE:ARNC) was spun out of Alcoa (NYSE:AA) in late 2016, the company was heralded for its growth potential and projections for strong margins supplying finished metal products to the high-flying commercial aerospace sector.

The results to date have fallen significantly short of those initial expectations. Coming off a rough start to 2018, investors are left with little reason to hope things will turn around any time soon. 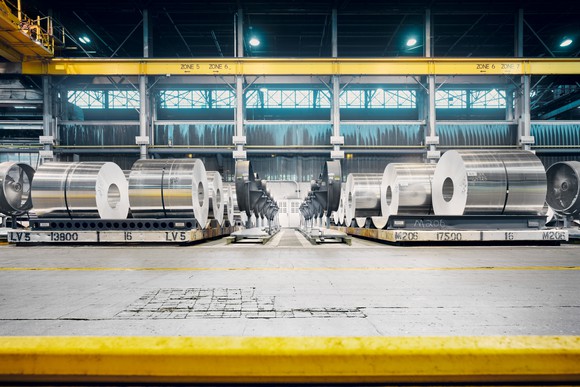 Shares of Arconic plunged nearly 20% on April 30 after the company reported first-quarter results that largely met analyst expectations but cut full-year guidance for both earnings per share and free cash flow. CEO Chip Blankenship, who took over on Jan. 15, on a call with investors said Arconic is plagued by performance “variation” across its 151 production sites that will require increased spending to resolve.

Arconic has enviable positions supplying components used on strong-selling narrowbody aircraft platforms and the engines that power them but isn’t fully taking advantage of increased demand. Blankenship said meetings with customers have produced “mixed” feedback, admitting that on some key programs Arconic is failing to keep up with customer demand.

Arconic was cobbled together by Alcoa via a series of acquisitions, and it is growing evident that its former parent did a poor job of integrating what it had acquired prior to the spinoff. The businesses were envisioned as a way to lessen Alcoa’s exposure to highly cyclical commodity prices, but it was Arconic’s portion of the business that hurt Alcoa results in the quarters leading up to the split, and the company has continued to have issues as an independent entity.

And commodity prices are compounding issues for Arconic, specifically a surge in raw material prices due tothe threat of tariffs and sanctions. Aluminum prices are up by more than 40% during the company’s short life as a public company. Arconic is assuming prices will remain at elevated levels through the remainder of 2018.

Arconic slashed full-year free cash flow guidance in half, from $500 million to $250 million, with about two-thirds of the revision driven by metal prices and additional capex requirements as well as production issues accounting for the rest. 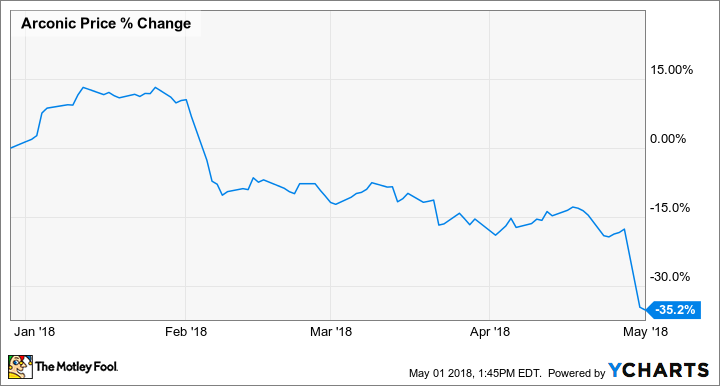 It could still get worse

Blankenship stressed on the call that in reducing estimates, the company has attempted to establish a bottom on earnings. But the still relatively new CEO continues to dig into operations, so more surprises could be discovered.

The company also isn’t ready to say that it will be able to reduce capex spending next year.Arconic is seeking experienced plant managers and engineers to try to help it work through operational issues, which could add to costs, and said it might not be ready to guide on 2019 capex spending until late in the year.

Despite Arconic’s issues keeping up with customers, the company is hopeful its operational issues will not cost it any customers. Blankenship said demand remains strong, noting that Arconic is one of only a small number of companies with the capabilities to fill that demand.

“This narrow-body ramp and the engine programs associated with that, they need strong suppliers to deliver high-quality parts in shorter lead times,” Blankenship said. “To the extent we can demonstrate that over the next 18 months or so, I think we are looking at great opportunities in the future.”

In February I expressed optimismthis would be the year Arconic gets its act together. Given the stock is off 27.9% since then and expectations have been cut, my optimism was unfounded. It would be easy to blame the tariff threats for Arconic’s issues, and they certainly have not helped, but Arconic has serious operational issues that would be holding the company back regardless of metal prices.

I still like the potential for this company, but management has made it clear it is going to take time to work through the issues. And despite Blankenship’s reassurance investors need to be concerned that customers will shift future business toward rivals including Allegheny Technologiesor Berkshire Hathaway-owned Precision Castparts. There is also some risk that even if Blankenship succeeds by the time Arconic is firing on all cylinders, this multi-year surge in commercial airplane orders will be on the decline.

Shares of Arconic are substantially cheaper now than they were in February, but that doesn’t mean they are a bargain. I see no reason to rush in and buy Arconic shares right now.

Here are stocks that are in the news today:

Texmo Pipes and Products: Board allotted 13 lakh equity shares at a price of Rs 23.20 per share, aggregating to Rs 3.01 crore to

Good morning. This i