Wall Street brokerages predict that Teekay Tankers Ltd. (NYSE:TNK) will report $92.34 million in sales for the current fiscal quarter, according to Zacks Investment Research. Three analysts have issued estimates for Teekay Tankers’ earnings. The highest sales estimate is $103.70 million and the lowest is $78.33 million. Teekay Tankers posted sales of $108.79 million during the same quarter last year, which suggests a negative year-over-year growth rate of 15.1%. The firm is scheduled to issue its next earnings report on Thursday, August 2nd.

According to Zacks, analysts expect that Teekay Tankers will report full-year sales of $373.96 million for the current year, with estimates ranging from $327.10 million to $411.00 million. For the next year, analysts expect that the company will post sales of $446.77 million per share, with estimates ranging from $408.16 million to $503.40 million. Zacks Investment Research’s sales averages are an average based on a survey of sell-side analysts that cover Teekay Tankers.

Teekay Tankers (NYSE:TNK) last issued its earnings results on Thursday, May 17th. The shipping company reported ($0.08) EPS for the quarter, meeting analysts’ consensus estimates of ($0.08). The business had revenue of $88.47 million during the quarter, compared to analyst estimates of $83.84 million. Teekay Tankers had a negative return on equity of 5.32% and a negative net margin of 17.16%. Teekay Tankers’s revenue was down 17.1% on a year-over-year basis. During the same period in the prior year, the company posted $0.04 earnings per share.

Teekay Tankers Ltd. engages in the marine transportation of crude oil and refined petroleum products through the operation of its oil and product tankers worldwide. The company also provides ship-to-ship transfer services, including lightering and lightering support, consultancy, and LNG terminal management services. 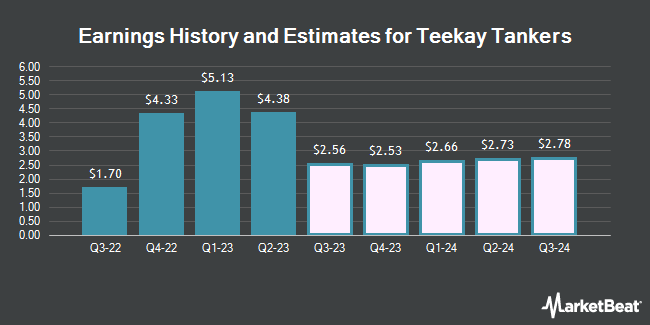