Ambow Education (AMBO), which used to be listed on the New York Stock Exchange, will sell 1.5 million ADSs at $3.50 to $4.50 per ADS in the American markets. While it may seem that the offer price is too low, taking into account the previous accounting scandals of Ambow, I dont believe so.

The company was incorporated in the Cayman Islands in 2007, and is currently headquartered in Beijing, China. The business activities are described with the following words in the prospectus:

Our business addresses three critical demands in Chinas education market: the desire for students to be admitted into top secondary and post-secondary schools, the desire for graduates of those schools to obtain more attractive jobs, and the need for schools and corporate clients to optimizing their teaching and operating environment. Source: Prospectus

The company is not small. As of December 31, 2017, Ambow had 39 learning centers and schools. The list of units includes 3 directly operated schools, 9 tutoring centers, 18 training offices, 8 career enhancement centers, and one career enhancement campus. A priori, the business seems to be 100% based in China: 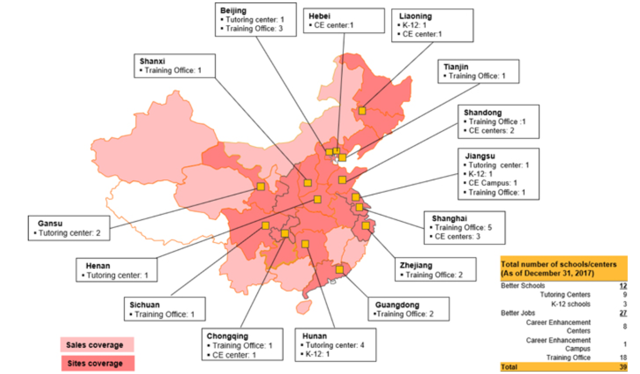 There are 1,043 teachers, 230 employees selling the companys courses and services, and 391 people in general and administrative functions. Let me make a quick statement on the amount of people working on each role. More than 50% of the full-time personnel are not teachers. With this in mind, I believe that Ambow needs to invest quite a lot of money to sell the courses. Students dont seem to contact the company to get education. The company contacts them.

Doesnt look like the courses are not of high quality? Additionally, I am not part of the education industry, but I remember well that universities, high schools and tutoring centers used to be full of teachers. Sales and Marketing were not that important. I dont think that Chinese education companies can be such an exception.

To sum up, I dont appreciate the ratio between the number of teachers and sales and marketing professionals. I believe that sales work very well if you offer valuable courses. In any other case, in my opinion, the business cant be sustainable.

Who are the clients?

I could not read about any remarkable client in the prospectus. With that in mind, it is relevant to mention that Fortune 500 enterprises are said to collaborate with Ambow. Have a look at the following paragraph:

The previous decline in the stock

As usual, the decline of Ambow Education did not happen as a result of only one reason. Having said that, I want to note two very important events that showed the financial state of the company four years ago. 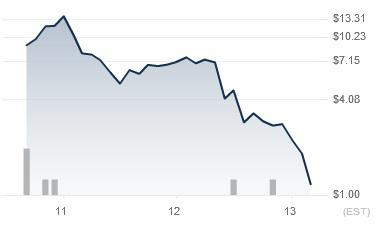 The first event happened in 2012. The company was not able to file its 2011 10-K on the due date. It also communicated that the management needed to modify previous quarterly results. That was not all. A previous employee of Ambow released that the companys accounting was fraudulent. As a result, the pressure of the shareholders was so large that the company had to go into provisional liquidation by a court in the Cayman Islands. You need to know the following information:

The second event happened in June 2013. Baring Private Equity, also a stakeholder of Ambow, launched a bid to acquire the company. I have to admit that I thought that the move was brilliant. The company was trading at about 1.5x trailing EBITDA and one time its cash per share:

Well, we were all wrong; Baring Private Equity lost tons of millions. The reaction of the Board of Directors was completely unexpected. Instead of welcoming the offer, four independent directors and auditors resigned, which ultimately caused the ADSs to be suspended from trading on the NYSE.

Read the reaction of the smart people from Baring:

Whats my take? I believe that insiders of Ambow did not want anybody new inside the firm. Are they hiding fraudulent accounting books? Nobody can really know it. However, this worst-case scenario will affect the company and its share price in the future. While $3.50-$4.50 seems, a priori, too low, it makes sense when we check the previous background of Ambow.

How did The Board Of Directors React? – The Audit Committee Investigation

In my opinion, the Board of Directors reacted very well after the scandal. They hired Deloitte and DLA to conduct an Audit Committee investigation. The results were received in 2014. DLA concluded that there was insufficient evidence to substantiate the allegations as to questionable or inappropriate conduct. Regarding this matter, the prospectus reads as follows:

Having said so about the accounting of Ambow, lets see now what we have in the books.

The most interesting asset is the cash. As of December 31, 2017, there were $30.0 million in cash and cash equivalents. Taking into account 40.8 million weighted average shares outstanding, I obtained $0.73 in cash per share. Ambow is trying to sell shares at $1.75 (1 ADS = 2 shares), so approximately 40% of the share price is cash. If you dont revise the previous history of the company, the shares look quite interesting.

While the company shows $150 million in assets and $124 million in total liabilities, there is very little debt outstanding; approximately 6 million in long-term borrowings. I appreciate this feature. The financial risk on this name is quite low.

Regarding the income statement, in 2017, the company reported revenues of $68.2 million, or $1.67 per share. Thats another interesting ratio showing the undervaluation of Ambow. On top of it, the company is also reporting gross income of $28.8 million and positive operating income of $0.3 million.

While the company had no financial debt, it did have a large amount of accounts payable a few years ago, which had to be reduced. In order to do so, in 2017, Ambow sold subsidiaries Ambow Online and 21st Training Center for nil consideration and 1 yuan respectively. Additionally, it had to sell its interests in Jinghan Group receiving approximately $0.075 million (RMB 500,000 x $0.15/RMB). In this regard, this is the information given in the prospectus:

Whats my take? I wanted to mention these sales to show that the company seemed to be getting into some financial trouble before the NYSE delisted the stock. Perhaps, the financial situation was not that great, which forced the management to modify the financial statements to look good in front of shareholders. It may explain why the auditors and the independent directors resigned when the private equity firm tried to acquire the company.

Who Are The Shareholders? – Low Float

Directors of the company control 62.96% of the total outstanding shares. Among the directors, Jin Huang, President, Chief Executive Officer and Chairman of the Board, owns a stake of 58.74%. This amount of shares includes the stock owned by the New Flourish Holdings Limited, and Spin Rich Ltd., which are the entities controlled by this director:

John Porter also owns a large percentage of the company as he is sole director of CEIHL Partners (I) Limited, and CEIHL Partners (II) Limited. These two entities own stakes equal to 4.22% and 13.74% respectively.

In the table above, there are only two shareholders without a clear relationship with directors. These are Baring Private Equity and New Summit Global Limited controlling 4.04% and 3.43% of the total outstanding shares respectively.

Whats my take on this information? I dont appreciate the fact that the amount of shares owned by the public is low. This means that the float is very low, which could increase the volatility in the share price. This is another very important risk to factor in.

If we check the revenues and the cash on hand, Ambow Education is selling ADSs at a low price. Traders only looking at these variables will be very interested in the company. Having said so, the previous scandals of the company and the fact that directors resigned when Baring tried to acquire it are bad features. With this in mind, I can understand why underwriters decided to sell the ADSs so low.