The Zacks #1 Rank New Highs screen will help you find them. Remember, you shouldn’t be afraid of stocks reaching new heights, because a really smart guy once said that objects in motion tend to stay in motion. The same is true for stocks.

Despite the delta variant, rising inflation and the possibility of the Fed tapering; stocks still have the potential for a strong back half of 2021 as we inch closer to normal. This screen can help you get ready by finding stocks most likely to leap higher moving forward. Below are three names that recently made the list.

Not only is the semiconductor space going through several structural changes at the moment, but it’s also experiencing a chip shortage that’s sending demand through the roof. One of the companies operating well in this environment is onsemi (ON Quick QuoteON ) , which has beaten the Zacks Consensus Estimate for five straight quarters and is up approximately 37% in 2021.

The former ON Semiconductor is an original equipment manufacturer of a broad range of discrete and embedded semiconductor components. Therefore, it’s part of the semi – analog & mixed space, which is in the top 12% of the Zacks Industry Rank.

In its second-quarter report from early August, the company enjoyed broad-based strength across its industrial, computing, consumer and automotive end markets. Revenue jumped to $1.67 billion, which was over 37% better than the previous year while also beating our expectations by nearly 3%.

Earnings per share of 63 cents topped the Zacks Consensus Estimate by more than 28%, which brought the four-quarter average surprise to just under 25%.

Just a little over two weeks ago, the company entered into a definitive agreement to acquire GT Advanced Technologies for $415 million in cash. The move will help ON grow its supply of silicon carbide (SiC), a key material that can handle high voltages and thermal loads. It’s a major component in EVs, EV charging and energy infrastructure.

The automotive market helped all business segments in the quarter. The Power Solutions Group (PSG) business segment (which accounts for 50.7% of revenues) surged 37% year over year. The Advanced Solutions Segment (ASG) soared 42%, while the Intelligent Sensing Group advanced 28.1%.

Leave it to an unprecedented pandemic that forces people indoors to teach the importance of buying in bulk. It kind of defeats the purpose of social distancing if you’re running to the grocery store a couple times a week. So it makes sense that a company like BJ’s Wholesale Club (BJ Quick QuoteBJ ) would beat the Zacks Consensus Estimate for six straight quarters, which runs right through the year of Covid and more.

Earnings per share of 82 cents beat the Zacks Consensus Estimate by more than 26%, bringing the four-quarter average surprise to more than 25%. Total revenues of $4.17 billion improved 5.6% year over year and eclipsed our expectations at around $3.9 billion. 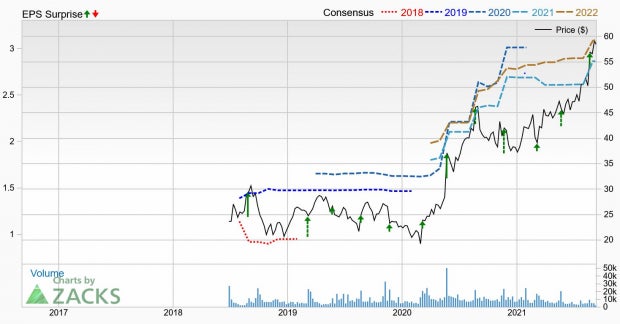 Traffic jams aren’t reserved for dry land these days. Anyone who lives in a port city knows that the world’s supply chain is all messed up in the age of covid. That’s bad news for consumers and businesses that sell to them, but is kind of a boon to the containership charter market as shipping costs soar.

High demand and a tight supply of ships led to a strong second-quarter performance for Global Ship Lease (GSL Quick QuoteGSL ) , a leading independent owner of containerships. T! his envir! onment should remain for the foreseeable future, as record high charter rates lead to longer charter durations. As a result, the company’s earnings are currently expected to surge nearly 100% in 2022 over 2021.

GSL has a diversified fleet of mid-sized and smaller containerships. As of August 5, 2021, it owns 61 containerships and has contracted to purchase four more. Shares are up nearly 103% this year. It’s part of the transportation – shipping space, which is in the top 28% of the Zacks Industry Rank.

In its second quarter, earnings per share of 66 cents topped the Zacks Consensus Estimate by nearly 18%. It was the sixth straight positive surprise and marked an average beat of nearly 13% over the past four.

Revenue of $82.9 million bettered our expectation by more than 4% and advanced from $71.4 million a year earlier. GSL also grew its fleet by over 50% so far in 2021 and added over $900 million of contracted revenues.

The Zacks Consensus Estimate for this year is now at $3.37, which is up 5.3% from two months ago. But the big news is the outlook for 2022. GSL expects containership demand to remain strong moving forward, as it will take time to get back to normalized levels. 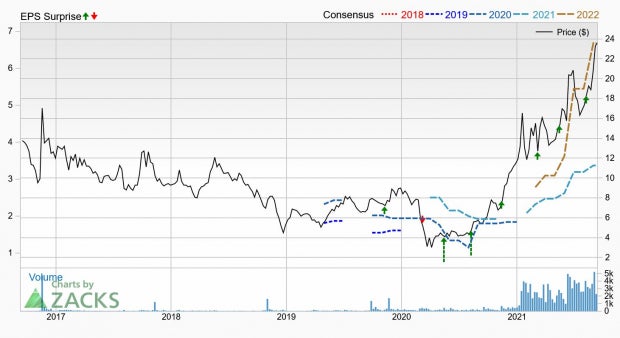