Intel (NASDAQ:INTC) is one of the largest chip companies in the world.

In 2017, it took in $62.8 billion in revenue, and in 2018 the company expects that figure to grow to an eye-popping $67.5 billion, thanks to a better-than-expected market for personal computers, strength in its data center business, and continued growth in its Internet of Things and non-volatile memory businesses.

The reality is that Intel is a large company and, as a result, needs to go after large opportunities to deliver enough revenue and profit growth to keep stockholders happy, since technology companies that don’t grow don’t tend to be viewed as attractive investments.

Here are three growth opportunities that could each add more than $1 billion in revenue to the company’s top line over the next three to five years. 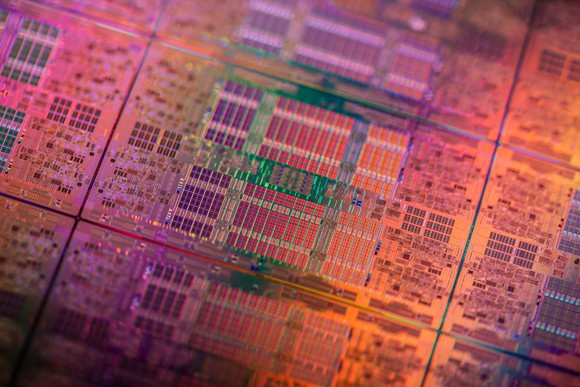 Intel has long sold storage drives based on a type of computer memory known as NAND flash via its non-volatile memory solutions group (NSG). As the name of the business unit suggests, NAND flash is a type of non-volatile memory, which is just a fancy way of saying that when data is written to that memory, it stays written to that memory even when power to the device is removed.

In 2017, NSG generated $3.5 billion in revenue, or just under 6% of the company’s overall revenue for the year. Putting that $3.5 billion figure into context, this represented 36.6% year-over-year revenue growth — the best growth that this business segment has enjoyed in years.

A little while back, an internal memo from Intel CFO Bob Swan was published. In that memo, Swan said that the company aims for NSG to grow at a 33% clip annually through 2021 — growing the business to more than $10 billion in annual revenue during that time.

Intel’s competitive positioning in the non-volatile memory market continues to improve and the overall market for such products is healthy as overall storage demand grows and non-volatile memory displaces mechanical storage drives. Ultimately, I think Intel’s internal growth aspirations with respect to NSG are ambitious but are within reach as long as it continues to execute as well as it has.

Intel has been quite public lately about its ambitions to enter the market for high-performance graphics processors, targeting a wide range of workloads from 3D gaming to machine learning.

This market is large and growing fast. Market leader NVIDIA (NASDAQ:NVDA), which claims to have at least 90% revenue share in the markets that it serves, generated $8.137 billion in revenue from stand-alone graphics processors — a figure that was up 40% year over year.

Not only has Intel announced its ambitions to enter this market, but it has hired key industry veterans to spearhead these efforts. For example, late last year, Intel hired Raja Koduri, a highly respected graphics architect, to oversee the development of the company’s core intellectual properties, which includes its graphics processors.

Intel isn’t shipping any stand-alone graphics processors today, but I expect that the company will begin shipping its first graphics processors within the next two years. By then, I think the market will be worth more than $10 billion annually. As long as Intel’s go-to-market strategy is reasonable (Intel’s marketing tends to be very good) and as long as its first products are good, a path to around 10% market share — or around $1 billion in revenue — doesn’t seem unreasonable at all.

In the second half of 2016, Apple (NASDAQ:AAPL) launched its iPhone 7 series smartphones. Many of those phones included cellular modem chips supplied by Intel. Apple continued to use Intel modems in the follow-on iPhone 8 series and iPhone X smartphones, which helped to fuel further growth in Intel’s modem business.

That business, according to my analysis, is good for about $1 billion in annual revenue.

According to a report from Fast Company, Intel is expected to provide Apple with around 70% of its cellular modem needs in the upcoming iPhone product cycle, with that number growing to 100% in the cycle after that.

If Intel is successful in ultimately growing its modem share at Apple to 100% (up from what I believe to be sub-50% during the iPhone 7 series cycle and in the current iPhone 8/X series cycle), then this could mean more than $1 billion in modem-related revenue growth over the next few years.

Beyond Apple, if Intel can leverage its modem technology to build applications processors to go after the broader smartphone chip market (remember that Apple’s total unit share of the smartphone market is around 15%, per market research company IDC), then it could add additional billions in annual revenue to its top line. Considering that there’s evidence that the company intends to do just that, I think it’s reasonable to be cautiously optimistic that Intel’s smartphone-related business has room to grow beyond its dealings with Apple.